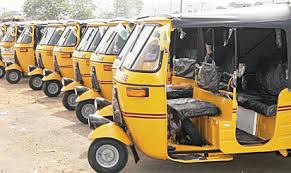 Keke operators in Owerri, yesterday defied State Government order to cease  their operations as they resisted the ban.

ENTRACO officials were said to gone after Keke riders who defied the ban which led a clash.

Governor Rochas Okorocha had issued a deadline of December for Keke riders to cease to operate in Owerri in line with its urban renewal programme.

In October, he instructed Keke riders not to ply major roads in Owerri, an instruction they carried out as they begged for more time for his His Excellency to have a rethink.

However, the latest ban forced workers and residents to trek to their places of work and homes yesterday.

This morning, fewer Keke operators were on the streets avoiding ferrying passengers.

One of them who spoke on condition of anonymity ” This is inhumane.This is a government we elected and this is what we get in return. How do the want us to survive. The taxis he brought are too expensive to purchase. Each of them goes for more than a milion naria.Where would I get such money.The Govern or has to listen us.There is so much hardship in this state. How does he want us to survive”

Costa Excluded From Chelsea League Opener, On Holiday In Brazil

innonews - August 10, 2017 0
Diego Costa will not be part of Chelsea season- opener against Burnley this weekend. Costa scored 20 goals for the league champions last season but...

PDP: Imo Assembly Members Who Defected To APC Have Lost Their...

innonews - January 29, 2020 0
BY RALPH EJIMKONYE, ABUJA The national leadership of the Peoples Democratic Party, PDP has reacted to the...

innonews - November 8, 2019 0
The Senate is working on a bill to regulate the social media in the country. The bill has passed its first reading....