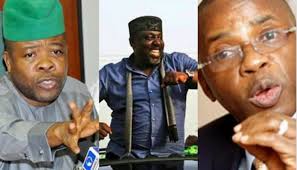 The duo had criticized the governor on the creation of Ministry of Happiness and Purpose fulfillment headed by Okorocha’s sister, Mrs. Ogechi Ololo

According to a statement by Sam Onwuemedo, Chief Press Secretary to the Governor, Okorocha said Ohakim as governor of Imo State for four years had no achievement to his credit.

“We also want to let the public know that the former governor of the State, Chief Ikedi Ohakim and the 2015 PDP governorship Candidate in the State Chief Emeka Ihedioha are the least qualified to criticize Okorocha on any policy or programme.

Ohakim was governor for four years and has no achievement to his Credit. And that administration could only be associated with the flogging of Citizens, including a Priest. Today, Owerri has twelve lane roads, 3 tunnels, two fly-overs, five in-land roads, four pedestrian bridges, street lights and befitting structures,Courtesy of Governor Okorocha”

For Ihedioha, he said “Chief Ihedioha was in the House of Representatives for 12 years and ended up being the Deputy Speaker but could not fix the only market called Nkwo-Mbutu in his ward, Mbutu, and all the NDDC Projects that have developed K-legs in the State are directly or indirectly linked to him.

“And that was the reason he could only extract victory in the three Local Governments of Mbaise where he comes from, with INEC, and all the federal agencies fully behind him during the 2015 election”

“And that was the reason he could only extract victory in the three Local Governments of Mbaise where he comes from, with INEC, and all the federal agencies fully behind him during the 2015 election” he stated
The Governor said he has completed more than one thousand projects .

“Rochas has more than 1000 Completed and verifiable projects located in various parts of the State. And his achievements have surpassed the achievements of all those who had governed the State before him put together. Anybody with contrary claim should come forward with his facts or verifiable claims”

“On the issue of Pension, the government has also shown interest and commendable commitment to the payment of Pensions. In December 2016, the government cleared all arrears of Pension and began monthly payment this year and one hundred percent too. The government has only few months to clear and is not leaving any stone unturned to ensure that the few outstanding months are also cleared. We stand to be challenged on all our claims” the statement concluded

innonews - May 17, 2018 0
*BY DAN OPARA* Mechanics operating at the Ultra-Modern Mechanic Village Avu in Owerri West LGA of Imo State have called on Governor Rochas Okorocha to...

innonews - March 13, 2018 0
Fireworks have continued unabated in the Imo State chapter of the All Progressive Congress, APC with the State Chairman, Hilary Eke kicking against the...

innonews - September 5, 2020 0
BY RALPH EJIMKONYE The Peoples Democratic Party, PDP, is holding its primary election to elect a candidate for Okigwe...