Home Politics Anambra 2017: Cutting Off Our Nose To Spite Our Face BY... 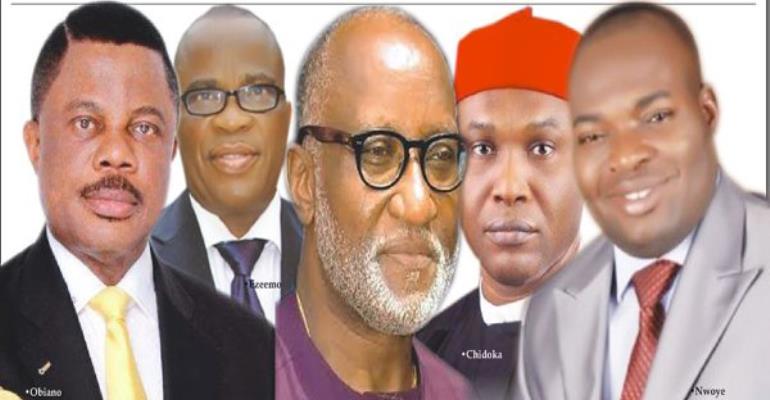 The just concluded Anambra State election really was not an election as much as it was a referendum on Peter Obi. It was an opportunity for all who had grievances to air them and take revenge as the case maybe.

The media hype despite the incompetence of the government was superb. Exploiting all the weaknesses of the elite and the aggrieved and played it for all it was worth.

The incumbent governor opened up the state vault to defeat his nemesis. No cost was spared because “we have to defeat Peter”. Everyone who could be bought was well-bought .The economy made it easy to purchase votes if not loyalty. As long as you disliked Obi,there was a place for you.The state coffers being empty was not a problem. When it seemed like it depleted, borrowing was not a problem. Throwing everything good and bad at the “Oracle” as he was referred to was the mantra. Truth did not matter. The propaganda on Obi was so much and loud it drowned out any other candidate.

Obi was not on the INEC ticket but he was on the ticket.

The incumbent governor was so obsessed and focused on Obi, nothing else mattered. He was prepared to outspend Obi and he did. He had to do anything Obi had done and more. At the end of the election, he ” won” ,so much so he had all believe he won all 21 local governments. “Yes! Finally I have bested Obi and have won” but at what cost? Empty states coffers which cannot be hidden forever, struggle to govern a state when all the saved funds have been squandered ensuring Anambra rejoined the list of indebted states.

The obsession may have led to a “win” but the final act is yet to be played. 4 more years and all will judge just how well he governed. How much debt will be left to his successor,how much of the state will be functional? Only time will tell but for now, let’s enjoy the euphoria of the win. The positive of the win though is the survival now of the party. The party has been given a new lease of life and it is hoped it can yield more successes though the funding of the party is dependent on the state finances .

The Church played its own role. The Anglican communion was more neutral and fair maybe because the 3 top runners were Catholic . The Catholic Church simply forgot their vows and robes and waded into the dirty politics of misinformation ,arm twisting ,divisiveness and where necessary,blackmail.The upper echelon of the church may have as well removed their robes. All the teachings of the Bible were out through the window.
Everyone even the pope is entitled to their individual preferences on who to vote for. The problem was using the pulpit to coerce congregation who listen faithfully because they trust.

The question one asks is how much of the decision was based on the truth and what was best for their congregation? How much of the propaganda did they know were lies but went along with it.? How much of what the incumbent administration said were pure fabrication which could be proven and was proven did they turn a blind eye to?

What was the motivation? Greed,maybe not as much. Malice and revenge (which are sins by the way ) towards Obi? Sticking it to Peter Obi seemed to be the mantra. The churches role was so nauseating ,it makes it so hard to actually think you can go to these “men of God” for confession. Who do they confess to?

It is hoped that they can make restitution to their congregation when the time comes and things go south! We hope they don’t.

The irony in this is that the very Church that Peter Obi empowered politically has now turned against him and used that power against him. It is the law of Karma. Incumbent please take note!!!
The solution is that the church having played out itself as fallible as anyone else should probably return to the original purpose for which they have the robe ” lead the church of Christ ” as Christ did.

The elites finally have their chance to get theirs against Peter Obi. I am still trying to figure out what exactly they have against him. I have heard of people saying he thinks he knows everything, he handles state money as though it is his. I have also heard about people who are angry because he brought the incumbent and now he does not want him,he brings someone else. I guess part of the angst is why he should be the kingmaker all by himself thus diminishing their roles.

I can see where this could be frustrating but once again,it is not about the state,the electorate but themselves . They can all pump their fists because they won but did the state win? A lot of these elites will openly tell you,they know the incumbent is incompetent and has done nothing but the joy of beating Peter Obi trumps all consideration especially when they get paid doing it. It is expected that they will prevail on the incumbent administration to fulfill some promises . If that does not happen,we will all pay the price.

As far as Peter Obi is concerned , he maybe down now but certainly not out. Let’s remember that the administration has but four years and it seems to go by quickly. One never knows who is coming next and in this business, revenge is best served as a cold dish!

Oh my!! What a party! All the top players but a few in this party at one time or the other suffered at the hands of Peter Obi and APGA.
How dare he come into this party to lord it over them again!
How much of one man can we take?

He comes into the party and wants to take over and impose his own candidate . We will not let it happen!! Never!
The party ,not having won a gubernatorial election in 12 years have been fragmented and fractured. It became a collection of warlords for rental. It became all about money.

Which one of them wanted a governor? Not the senator who preferred to be the highest ranking member in the state. Not the house members who were all important even though they have done nothing for the state. Is it the warlords who will lose their cash value with no structure to rent out? Some of the members had genuine grouse of not being recognized for their longevity in the party.

It seemed impossible to stop Peter Obi taking over their party so they did what they do best. Rent out themselves to the highest bidder. In this case,there was an additional incentive, the intense dislike for a Peter Obi.
It worked! The incumbent won!

Irony now is that they are all back to PDP to fight for position and structure . Some have moved to APGA but hope to use the PDP structure to win future elections. It may work but 2019 is a lifetime in Nigerian politics and the problem of Peter Obi still remains.

The election is over.The incumbent has defeated Peter Obi but now comes governance. Hopefully the burden of debts and empty coffers will not hinder him too much. All that remains now is the legacy left behind after 4 years. That is the final fight with Peter Obi .

For Peter Obi,it is a bitter pill to swallow. The very state he gave his all to have now turned against him. The successor he brought in has made life uncomfortable for him. The elites who flocked around him have turned their backs on him. Finally, the church he empowered have used that same power against him. The good news is that he has 4 years to plot his next move. Thankfully, he does not have to worry about finances being independently wealthy. Those who think he is down and out do not know him well. I doubt we have heard the last of him. It has been said that he is very patient when plotting revenge so all who rejoice may have cause to worry later. As for the governor, I doubt we have heard the last of that 7.5 billion. I hope he has it saved somewhere as he will probably have to pay it someday .

For the electorate,my heart goes out to them as they never really mattered in all of this. The suffering continues.

innonews - March 18, 2020 0
With the spread of the coronavirus with five or more cases confirmed in the country, the Imo...