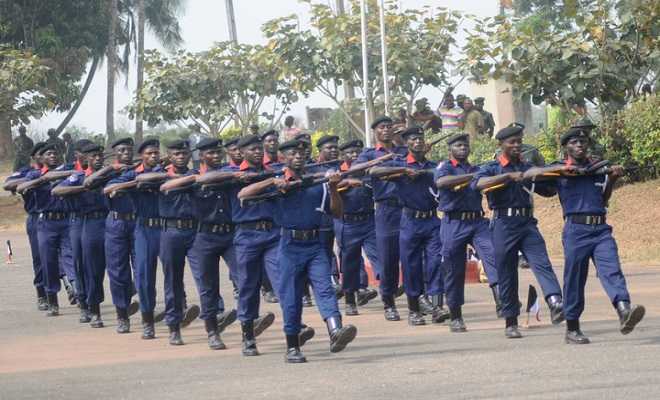 A face – off between the ENTRACO officials and the keke operator ensued which led the NSCDC operative to fire a bullet which hit the security Guard, Mr. Chizaram Anayo, aged 35 who came to intervene in the matter.

An eye witness account told our reporter that the operative who had a G4 sophisticated rifle was controlled by his colleagues who collected the rifle from him.

Speaking to newsmen at the Police Station, the victim, Mr Anayo who hails Ohaji/Egbema said that they ran into his Hotel with the Keke Driver and started fighting. He said he only raised an alarm that they should leave the Hotel premises before he was shot on his right leg.

The victim also claimed that the Imo State Commissioner for Public Safety,Hon.Chidi Nwaturuocha was among those who came into the Hotel with the team.

The Manager of the Hotel, Pastor Mike Mbata confirmed that the Public Safety Commissioner was in the crew of the team.

He however expressed  bitterness against the unlawful and untrained manner of the Civil Defence Corps operative and called on the law enforcement agencies to ensure that the offender is brought to book to face the wrath of the law.

Pastor Mbata called on the authorities to sack and dismiss the officer who shot his staff.

Spokesman of the NSCDC, Mr, Norwell Chimeziri said he will get back to our reporter when he was called to speak on the matter.

innonews - October 27, 2017 0
The list of commissioners nominees released by Governor Rochas Okorocha of Imo State has further confirmed the Governor's resolve to take the battle for...

Imo APGA Feeds The Poor, Disabled, Albinos, Others Get Palliatives

innonews - January 9, 2018 0
BY DAN OPARA As part of efforts geared towards promoting peace in the Niger Delta region of Imo State, a maiden unity carnival organized by the...

innonews - October 18, 2017 0
The All Progressive Congress, APC has scheduled October 31 for its National Executive Committee meeting. The National Caucus meets a day earlier on October...

innonews - August 17, 2022 0
The industrial action embarked upon by the National Union of Electricity Employees (NUEE) at the Transmission Company of Nigeria (TCN) power stations,...