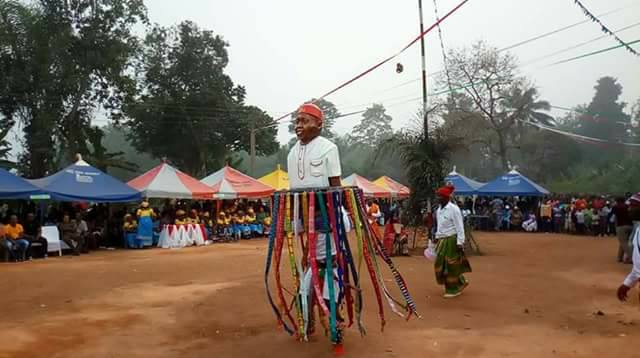 A photo of  a “statue”of the Deputy Speaker,Imo State House of Assembly,  Hon. Ugonna Ozuruigbo has been trending on the social media attracting flaks from critics.

However, a careful look at the photo showed it is a mere caricature of the image of the Deputy Speaker by masquerade dancers during the yuletide. The event had taken place at Amucha, Njaba LGA, a nearby Local Government close to Nwangele LGA which Ozuruigbo represents in the Assembly. Many believe that those shouting hoarse about the “statue” are only exaggerating the issue out of context.

A facebook user, Francis Udoka Ndimkoha wrote “You have been led to and you re now leading others into believing that a statue was erected for the Deputy Speaker of Imo State House of Assembly, Rt. Hon. Ugonna Ozurigbo. How wrong you are!  Take a good look at first picture in this update and clear your doubts. The bust image is but the face of a masquerade! The honour was done to him by the good people of Amucha, in Njaba LGA, not even his native Nwangele LGA. That said; to argue that Rt. Hon. Ugonna Ozurigbo is doing well as a legislator is a hackneyed fact. Let me repeat, for emphasis, that there was no statue anywhere, but just an add-on, to the face of a legendary masquerade.  Let my people learn!

Another facebook user, Che Oyinatumba  wrote “A study of deities in igbo will teach you that Ugonna has not done anything worthy of being deified by him or his image being a masquerade. As for you that claim to be a christian, this is the highest form of idolatry; the same spirit that propells Rochas into moulding inconsequential idols.

Jones Fcc Onwuasoanya  wrote “Well, there is nothing wrong in erecting a statue for a leader whose people believe has done well. A statue is simply a more expensive form of painting and I know that some of these people who quarrel with the erection of a statue have got a painting or two of their images hanging in their sitting rooms or offices”

The debate had flowed from the recent statue built by the Imo State government for South Africa President, Jacob Zuma and her outgoing Liberian counterpart, Ellen Johnson Sirleaf of Liberia. The unveiling of the statue according to reports stood at N520 million each. This led to widespread condemnation across the country.

Resolving The Conflict Between FG And Nigerian Youths (Part 1). BY...

innonews - November 2, 2020 0
For decades past, youth-crisis has been perceived as absolutely irascible, destructive and inimical to the unity,...

innonews - December 27, 2017 0
Former Secretary to the Government of Imo State, Sir Jude Ejiogu has unveiled branded vehicles which indicates his preparedness to seek for elective office...