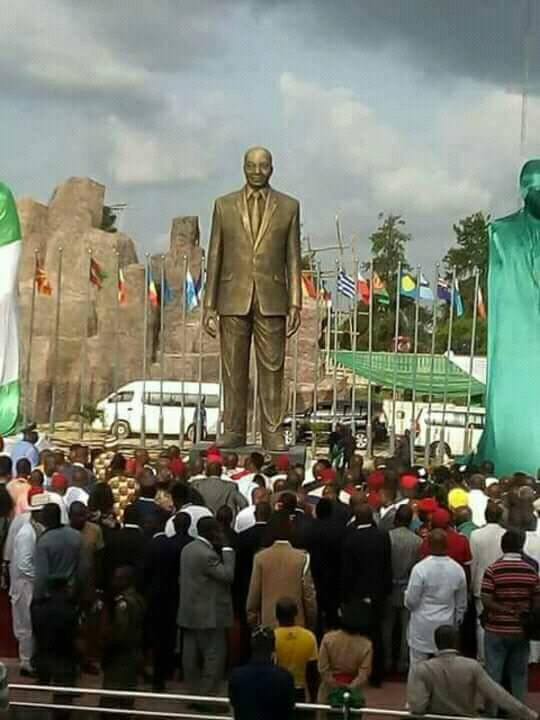 Questions have arisen over the huge statue of President Jacob Zuma in Owerri after the South African president resigned yesterday.

Zuma had quit as South Africa leader over allegations bordering on corruption.

The statue of the former South African leader was erected in Owerri by the Governor at an alleged huge cost that led to widespread  condemnation.

Okorocha had defended his action saying Zuma’s visit was a way of opening up Imo State to global leaders to make it friendly to foreign investors.

Mr. Sebastien Amadi,  a trader said Zuma’s resignation justify the outcry of majority of Imolites when the statue was erected

” Imolites had cried foul when Zuma’s statue was erected.  We complained on the cost considering the fact that salaries of workers were not coming as expected and pensioners were being owed” he said.

“And we now wonder what was the rationale to honour him in Imo State with such a huge statue.

” How could a foreign leader who had skeletons in his cupboard at home and our kith and kin murdered in his country be honoured in our dear State?

She continued ” For me the right people, I mean those who have no skeletons in their cupboard should be honoured in Imo State and not somebody like Zuma who had an image problem in his country.Now what happens to the statue? Would it be demolished.I leave the State government to answer that question”

He said ” In international politics, you use everything at your disposal to woo an investor. If our Governor felt that erecting a statue for Zuma was a way of attracting South Africa investors to the State,  there is nothing wrong with it.  It is unfortunate Zuma was enmeshed in a scandal back home in South Africa that has led to the crumbling of his presidency”

Why We Formed Coalition Against Rochas- APC BOT Member, Azuatalam

innonews - June 2, 2018 0
*BY DAN OPARA* A chieftain of the All Progressive Congress and a staunch member of Coalition or Allied Forces in Imo APC, Jasper Azuatalam has...

innonews - December 25, 2017 0
Senator Representing Owerri zone in the senate, Senator Samuel Anyanwu said he decided to seek  re- election for the second time as senator in...