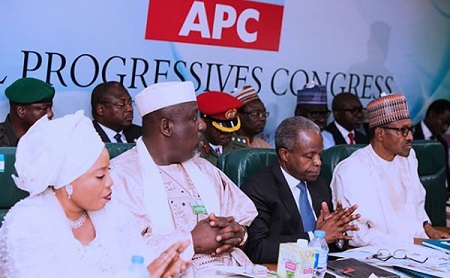 With the resolution of the All Progressive Congress, APC National Executive Council to retain all members of the National Working Committee and all party officers at all levels, Imo State Governor, Rochas Okorocha seems to have lost grip of the party in the State.

This has invariably  put spanners in the works in installing who takes over from him in 2019.

Reports said the Imo Governor had sponsored a motion at the NEC meeting of the APC where he called for the dissolution of the NWC and other party officers. The motion was defeated by 100 who voted against the motion and 4 who voted in his favour.

The Governor was said to have sponsored the motion on the grounds to have a clean sweep and pave way for congresses which he intended to use to plant his loyalists in the party at all levels in Imo State APC.

Imo APC had been badly polarized between the Governor and other stakeholders. 18 of the Local Government party chairmen in the State are said to have switched their allegiance to a governorship aspirant in the party, Senator Ifeanyi Araraume leaving the Governor’s camp with mere 9 LGA Chairmen.

Some other top party officers in the state are either loyal to some governorship aspirants such as the Deputy Governor, Prince Eze Madumere and Sir Jude Ejiogu.

The newspaper observed that there is jubilation in the camps of other governorship aspirants in the party in the State especially Senator Ifeanyi Araraume. As at the time of filing this report, there was no official reaction from the Governor’s quarters.

innonews - May 21, 2021 0
The Peoples Democratic Party, PDP, in Imo State, has appealed to Imo people, particularly the youth, to exercise restraint in the face...