*BY JEFF UMUNNA*
Youths seem to be taking over the political landscape in Imo State.

Investigations conducted by this newspaper at the weekend showed that some youths especially those in  the age category of 30-45 years have shown a strong desire to vie for one elective post or the other in 2019. They are mainly found in the Peoples Democratic Party, PDP, the All Progressive Congress, APC and All Progressive Grand Alliance, APGA

The resort by youths in Imo to seek elective is  is coming on the heels of comments credited to President Muhammadu Buhari who said in London last week that Nigeria Youths are lazy. The President’s statement  attracted nationwide outrage and condemnation.

Last year, Imo State Governor, Rochas Okorocha had announced that anyone above 50 years old will not succeed him as Governor of the State in 2019. Though his

pronouncement is personal and has no constitutional backing, it may have contributed  in the noticeable surge of the number of youth aspirants seeking for different public offices in Imo State.

In the Governorship race, there are two visible youths who have strongly declared their ambition to become Imo State Governor in 2019.

Hon. Tony Nwulu, member representing Isolo/Oshodi Federal Constituency in Lagos State but a native of Ezinihitte Mbaise LGA of Imo State. He is just 39 years old and is aspiring for the Imo governorship seat on the platform of the Peoples Democratic Party, PDP. In the All Progressive Congress, APC, Uche Nwosu, who is Okorocha’s Chief of Staff and son in law is also marching on with his governorship ambition. He is 42 years old.

It was observed that more youth governorship aspirants may join the contest before the primaries of political parties take place.  This newspaper observed that across the State, there are many youths who are either running for Chairmanship and Councillor ship seats in the 27 Local Councils. A good number of them are also in the race for the House of Assembly contest.

It was observed that after the Imo State Independent National Electoral Commission, ISIEC announced  July 14, 2018 as date for the Council Polls, it has led to  increase in the number of youths who have declared their intentions for public office. 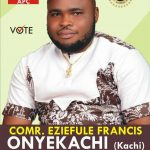 innonews - October 1, 2019 0
The National Youth Council of Nigeria, NYCN, has said despite the shortcomings and challenges facing the nation, there is still hope for...

innonews - June 5, 2018 0
The Imo State chapter of the Peoples Democratic Party, at the weekend got a lifeline from a front line governorship aspirant and a member...