The popular talented Ghanaian actress and a model have revealed her adorable baby girl at last.

Yvonne Nelsen left many people stunned after she took in for her British boyfriend, Jamie Roberts and eventually gave birth.

The sexy sweet mummy has recently showed her fans with face of her baby girl in a recent photo shoot for a magazine cover called “Agoo magazine”.

Speaking about child bearing, she had this to say: “People have been saying all sorts about why I’m having a baby ( @rynroberts ) whilst I’m not married. This is an answered prayer for me, they have no idea.”

According to her, even though it is wonderful to have a child in marriage, she holds no regrets over keeping the pregnancy and having her baby girl. 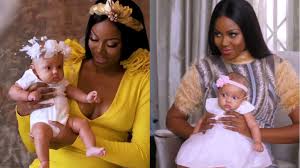 Chelsea’s Success, Not Number Of Goals I Score My Priority- Morata

innonews - November 11, 2018 0
Chelsea striker, Alvaro Morata has said the success of Chelsea this season is far more important to him and not to score 25 or 30...

President Buhari And The Youth Ambassador We Don’t Have. BY ALEX...

innonews - April 21, 2018 0
Presidents all over the world are the lens through which the international community and indeed the world views a nation, her people and what...