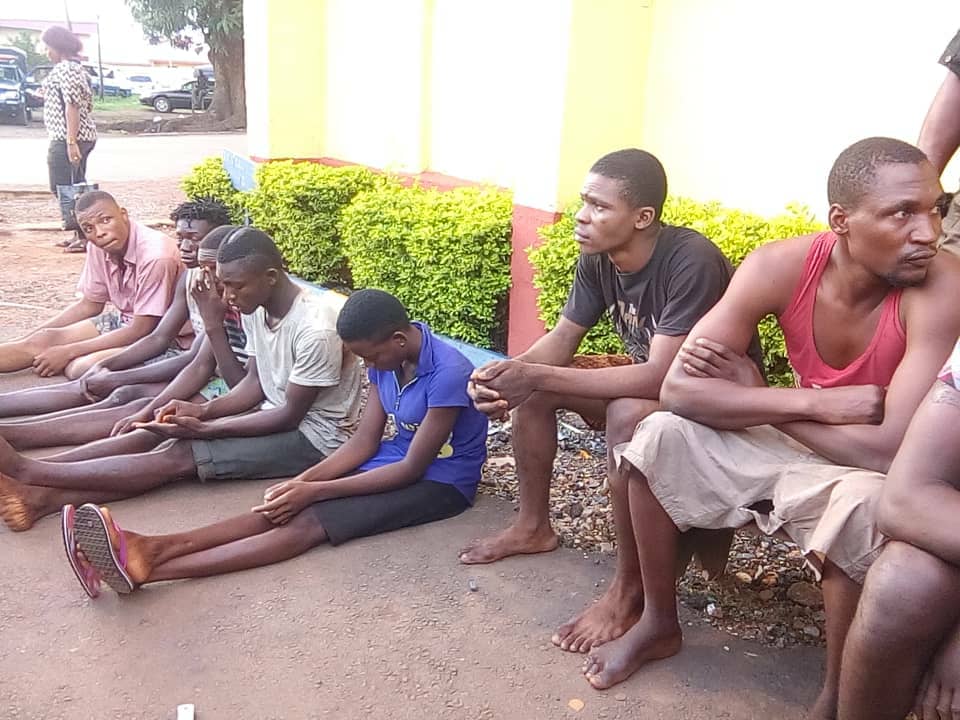 Parading the suspects at the State Police Headquarters in Abakaliki, the command spokesperson, Loveth Odah ASP said the suspects also robbed other innocent citizens of their belongings.

“One English berretta pistol, one live cartridge, 10 live ammunition, one Volkswagen car, one long machete and substance suspected to be charm were recovered from them”

She added that they have also confessed to the crime.

She said the six man gang led by one Ikpuecha Chinonso Desmond first attacked one Ikwuobe Odeh Samuel at his residence No 10 Ofor Street Abakaliki, kidnapped him and his friend in his Toyota Highlander Jeep with Reg No. MKD 421 TS and whisked him to a nearby bush at Azugwu Onuebonyi in Abakaliki.

“After robbing them of some cash and other valuables including phones and laptops, the gang blindfolded them and kept them hostage after which they proceeded with the said highlander jeep to kidnap Mr Oke”, she said

According to the police, one hour later at about 11 pm, the gang double crossed Mr Monday Oke as he left his Hotel, located at 95 Nnorom Street Abakaliki kidnapped him in his Honda car and took him to Onuebonyi River

Once there, they proceeded to rob him of a cash sum pof N200,000 in his possession and other valuables such as gold necklace, hand bangle, belt, ring, shoe, wrist watch, hand bag, iphpone8plus and Samsung galaxy edge plus phones.
Odah said the kidnappers then took his phone and transferred various large sums of money to their respective bank accounts which total amounted to N5.2m.

After robbing him, “Mr Monday Udoka was shot and pushed into the river by the gang believing that he is dead while the first victims Mr Samuel and friend were released unhurt”

On receiving the news, Odah said the command immediately commenced intelligence led investigation which took its operatives to Enugu/Nsukka where five of the gang members were arrested.

Mrs Odah further said that the command arrested one Awoke Ikechukwu also known as ‘IK Dokpor’, a prime suspect in the robbery and murder of one Michael Nwodom at Afikpo street Abakaliki on July last year.

Recovered from the suspect are one barreta pistol with 10 lives 9mm ammunition and the phone of the deceased.

The spokesman said the police also arrested one Oken Chimezie with one revolver pistol in his tricycle along G-hostel Abakaliki whle the duo of Ifeanyi Onyibe and Nweke Joshua were arrested for unlawful possession of a revolver pistol, one axe and a machete at Ezillo junction Ishielu local government area.

“One Nwabuike Nnabuike was arrested along No. 2 nsugbe Avenue Abakaliki who robbed one Ugochi Chukwu of her phone valued at N12,000 with constructed locally made pistol. The said gun and phone were recovered from him”, Odah said.

No PVC, No Admission, No Business- Imo State Govt

innonews - April 20, 2018 0
In a bid to tackle the non nonchalant attitude of Imolites towards obtaining their Permanent Voters Card, the Imo State Government has said it will embark...

innonews - September 20, 2018 0
Amaju Pinnick, the President of Nigeria Football Federation, NFF has been re elected. He scored 34 votes defeating other contestants such as Aminu Maigari who...

Uche Nwosu: I Never Said Owerri Zone Is Only Good For...

innonews - July 9, 2018 0
Chief of Staff, Government House, Chief Uche Nwosu has denied reports in the social media that he said Owerrri zone is not good enough...