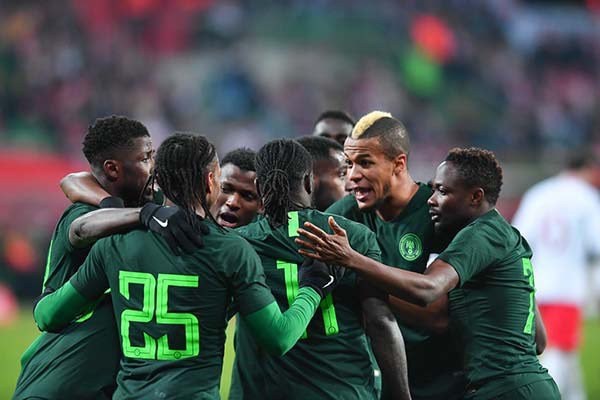 A former Super Eagles left back, Ifeanyi Udeze has handed Super Eagles coach, Gernot Rohr the list of players he should play in Nigeria’s next game at the 2018 World Cup in Russia.

The former Super Eagles defender also expressed belief in Nigeria’s chances of progressing to the Round of 16.

Nigeria lost 2-0 to Croatia in their opening game at the tournament on Saturday.

The Super Eagles will face Iceland on Friday in a game they must win and Udeze has advised Rohr on the starting eleven he feels can get the job done.

“About our chances of qualifying to the knock out stages, why not. Its about determination and support from Nigerian fans,” Udeze told Brila FM from Russia on Tuesday morning.

“We need to forget about the defeat to Croatia. The other teams in the group don’t have two heads.

“My line up for this match will be: Ezenwa; Ebuehi, Idowu, Balogun, Ekong; Ndidi, Ogu, Mikel; Etebo (from the left side of attack, cutting in because of his drive), Moses and Ighalo.

“Ighalo has not had much supplies but I know what he can do so I will still go with him. Ogu will start for me because he can mark. I will bring Alex Iwobi from the bench because he gives his best coming off the substitutes bench.

“I don’t know about others but I don’t give up until the referee’s final whistle. Even if this team is for the future, they need to move forward a bit. If they play as team, they can do it.

“Croatia was too physical against us, and I was worried that our players might be too heavy. You have to commit dome fouls, make the opposition uneasy if you can’t match their skills.”

innonews - October 4, 2019 0
Tammy Abraham has expressed excitement over his call up to play for the Three Lions of England in Euro 2020 qualifiers.

Ronaldo: My Big Shoes Too Big For My Son To Fill

innonews - September 19, 2018 0
World Best Player, Cristiano Ronaldo believes the shoes he's left for his son to fill is a really big one and it will be...