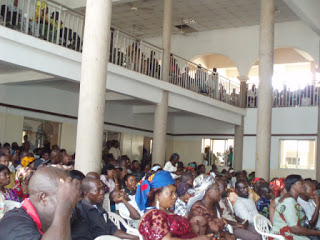 A group named Coalition of Imo Socio Cultural Organization and Town Unions have taken a swipe at Members of the Imo State Assembly, rejecting bills for establishment of Cattle Ranches in the State.

They also kicked against the issuance of Certificate of Occupancy (C of O) to lands in the rural areas currently before the lawmakers.

In a statement signed by Emeka Diwe, co-coordinator of the Coalition who is also President General of Orlu Zurumee and Barr. Sylvester Nwogu (Secretary), President Olu Owerri, the Coalition stated “that cattle rearing is a personal business of the Northerners and Herdsmen who do not own any land or village in Imo State, wondering why the Imo State House of Assembly abandoned other critical areas begging for their intervention, only to dabble into the dangerous invitation of the herdsmen into Imo State through the said bill”

The duo also, on behalf of the coalition made up of Orlu zurumee, Olu Okigwe, Olu Owerri and Town Unions in the State vehemently rejected the proposal for registration and certification of rural lands by the Imo State Government, insisting that it is another ploy to defraud the poor villagers and deprive them of their ancestral lands.

They cautioned the sponsors and promoters of the said bills not to provoke the masses and reminded them of the dangers the activities of the Fulani Herdsmen portend in any area they come in, calling on the Speaker of Imo State House of Assembly, Rt. Hon Acho Ihim to respect public opinion and drop the bills in the interest of the rural farmers and helpless women. They noted that Igbo people who are known all over Nigeria as spare parts dealers and traders are not given free land or stores in any part of the country, rather, they buy lands and rent shops at expensive rates to do their business.

The coalition called on the villagers, farmers and all Town Unions in Imo State to prepare to mobilize themselves to peaceful protest at the Imo State House of Assembly, should the bills continue to be read at the floor of the House.

The reaction of the coalition is coming barely a week members of the Imo State House of Assembly reportedly deliberated on the grazing bill.

The Speaker of the Assembly, Rt Hon. Acho Ihim in a statement signed by his Chief Press Secretary, Marcel Ekwezuo denied the allegations stating that at no time did the House members deliberate on the bill.

innonews - July 17, 2018 0
A former Governor of Abia State, Orji Uzor Kalu has bee re- arraigned before a Federal High Court in Lagos. He is been arraigned on...

innonews - October 6, 2017 0
The Nigerian Army has said the family of leader of the Indigenous People of Biafra, IPOB, Nnamdi Kanu know his whereabouts. This was made known...