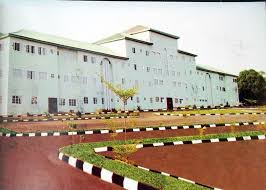 The Chief medical Director (CMD) of the Federal Teaching Hospital Abakaliki, Dr Emeka Ogah has denied allegations of corruption and mismanagement levelled against him and the board members of the hospital by online news medium based in Lagos.

Dr Ogah who briefed newsmen in Abakaliki was reacting to the publication which claimed among other things that the CMD and Board members had engaged in massive corruption and that two persons, the CMD, Dr Ogah and his Director of finance, Mr. Ugama had turned the health institution into their private establishment where monies meant for the development of the health institution is turned into their private pockets.

The CMD who described those allegations as laughable noted that not even one of them is true.

” This allegation is irrespective of the current Administration’s anti corruption crusade and treasury single account operation. One wonder where those millions come from as to be put into private pockets”.
On the alleged mal administration in the hospital Dr Ogah said the pertitioner and reporter are too mean as they do not known the real meaning of mal administration.

According to CMD who is in his Fourth year in office has attracted many things in the hospital to include establishment of Lassa Fever Centre, donation of lassa Fever consumables, Free medical treatment of the T,Y.Danjuma Foundation and gift of medical items by the MTN Nigeria.

He said the award of contracts and Drug supply in the hospital were all done following due process while salaries are paid from Abuja through the Integrated Payroll and Personal Information System IPPIS.

He said the allegations were calculated attempt to tarnish his image and that of the members of the board of the hospital and called the people to ignore the said report.

innonews - October 6, 2018 0
One of the governorship aspirants of the All Progressive Congress, APC in Imo State, Chief (Engr) Chuks Ololo, has spoken on the repeat guber...

innonews - July 2, 2021 0
PRESS STATEMENT Given the wave of anticipation towards the 2023 general elections, Dr ThankGod Ezeani, PhD., a former Federal...

innonews - July 8, 2021 0
About six members of the Imo State House of Assemby, have been suspended. They are Hon Uche Ogbuagu (APC,...