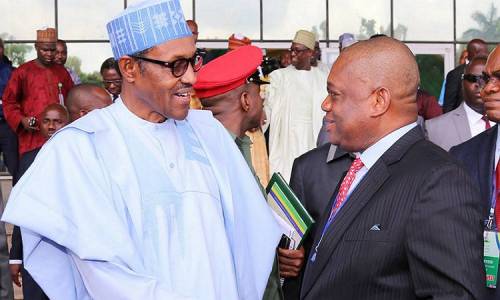 President Muhammadu Buhari will win with over 75% votes in the South East in the 2019 general elections.

This was disclosed by a former Governor of Abia State, Dr. Orji Uzor Kalu at an expanded executive members meeting of the All Progressive Congress which held at Igbere in Bende Local Government Area of Imo State.

He claimed that Buhari has done a lot for the people of the South East which previous leaders of the country, including former Presidents Olusegun Obasanjo and Goodluck Jonathan could not do especially on roads.

He pointed at the ongoing rehabilitation of the Enugu- Port Harcourt Expressway, Enugu- Onitsha Expressway and the ongoing construction of the Second Niger Bridge as some of the President’s major achievements in the region.

.“The party has the antidote against rigging and what it takes to win the polls at all levels in 2019.

“We will never allow anybody to rig us out of elections in Abia again. We shall match them force by force and money for money,” he said.

The former Governor urged APC leadership not to be weighed down by the gale of defections from the party, saying that “defection is a personal decision.

“It is their decision to defect to other parties, but it is also our choice to remain in APC.”

He stressed the need for APC to nominate credible candidates that would dislodge any opponent of its governorship candidates, in State and National Assemblies.

“The power to elect the party flag bearers is in your hands.

“Give us good candidates and we will match the powers-that-be in the state, any how they want it.

innonews - November 4, 2017 0
The resurgence of the All Progressive Grand Alliance, APGA in Imo State has put notice on the two leading political parties in the State,...

innonews - September 19, 2017 0
Bayern Munich and Germany goalkeeper, Manuel Neuer has been ruled of action until January after concluding a surgery on his broken foot. The 31 year...