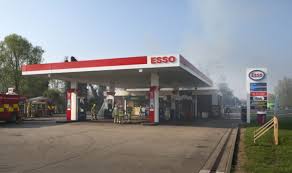 The Ebonyi Government on Tuesday sealed the Dipro Filling Station at Ezzamgbo for allegedly dispensing adulterated kerosene to consumers in the area.

The News Agency of Nigeria (NAN) reports that a resident of the area, Mrs Christiana Ibili, 34, reportedly purchased the commodity, which allegedly caused an explosion in a public residence on Aug. 24.

The explosion, which killed two children in the building, allegedly occurred when one of the tenants attempted to light up their lantern after pouring the kerosene into it.

The inferno also left Ibili and another tenant, 18-year-old Uchenna Ituma, with severe burns, while the building was razed.

Speaking on the incident, Mr Bassey Chima, the Special Assistant to Gov. David Umahi on Petroleum and Oil, said that the station was sealed to enable the government to carryout proper investigation into the incident.

“We want to analyse the commodity to ascertain whether it was adulterated as widely suspected.

“We also want to ascertain its source of procurement and whether other petrol stations procured from the same source in order to avert a recurrence,” he said.

Chima promised that the government would get to the root of the matter and warned the public to cease from patronising the station henceforth until further notice.

The Ebonyi Police Command Public Relations Officer, ASP. Loveth Odah said that the command had written to the Nigerian National Petroleum Corporation for expert sample analyses of the commodity.

Odah said that the director of the petrol station was on the run and that police were making frantic efforts to arrest him.

“The station’s manager, Mr Emmanuel Ominyi, and an attendant, identified simply as Anayo, are in our custody and assisting us with useful information.

“The petrol station’s manager curiously claimed not to know the director’s name and both he and the attendant claimed that the director solely handles the procurement of petroleum products,” she said.

Odah said that police were still guarding the petrol station to prevent angry youths of the area from destroying it.

“This measure is to prevent further loss of lives and property. We appeal to people of the area not to take the law into their hand,” she said.

She said that the command had commenced full investigation into the incident.

Dr Emeka Ogah, the Chief Medical Director of the Federal Teaching Hospital, Abakaliki, confirmed the death of the children.

Ogah also said that one of the survivors was still on admission in the hospital.

He said that the victim was responding to treatment but regretted that the hospital was in dire need of funds to be able to discharge its functions.

“It appears that the victim’s relatives abandoned him, so we appeal to the government, well-meaning individuals and organisations to come to his rescue,” he said

innonews - January 29, 2018 0
Chelsea is making a move for Arsenal striker, Oliver Giroud for a fee more than 35 million pounds. The Gunners are rounding up an agreement...

How Nnamdi Kanu Was Lured With ‘Cash Donation’

innonews - June 30, 2021 0
Leader of the Indigenous People Of Biafra, IPOB, Mazi Nnamdi Kanu was reportedly lured to a location in Ethiopia with a promise...

innonews - May 16, 2019 0
Imo State Governor, Rochas Okorocha has admitted that he never followed rules in governing the State in the last eight...