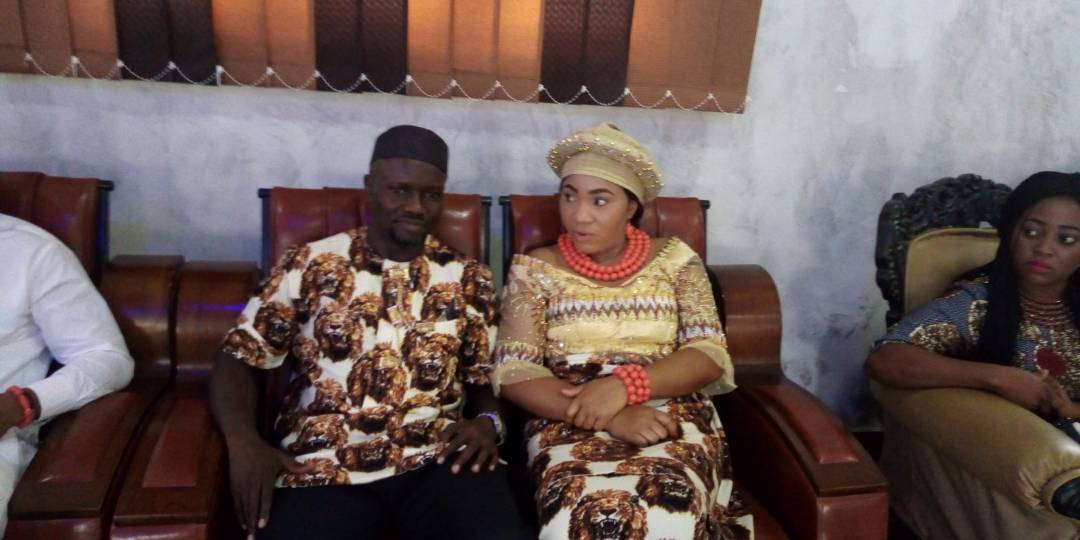 Hon (Amb) Chimezie Njoku was conferred with the Igbo traditional chieftaincy title, while his wife, Chioma Emmanuella Njoku was bestowed as Lolo “Oso-Di Eme-Oma 1 of Mbaise” by the Ugoezes at his palace last Tuesday August 14th, 2018.

In the presence of eminent personalities, well-wishers and various women groups, the conferment was performed before three revered traditional rulers of Aboh, Ahiazu and Ezinihitte LGA’s extraction.

Earlier, in his remark, Eze Iroegbu submitted that conferment of Chieftaincy titles were on merit with monetary involvements. He disclosed that the yardstick for conferring chieftaincy title on High Chief and Lolo Chimezie Njoku were met, as his Age grade and Umunna affirmed his worthy membership and exemplary character for the title.

‘The Oracle’ as he is refereed to revealed that an independent investigation was carried out to ascertain the true nature of the recipient by youths, and its result were satisfactory on account of his good exemplary character, kindness and humane nature.

Eze Iroegbu pointed out that he has ensured justice, equity and fairness during his 10year reign on the throne of Umuezie Nguru Autonomous community, assuring that he will not install chieftaincy titles on disrespectful individuals in the society.

In his address, the recipient, founder of Chizet Foundation and President General, Imo State Union South Africa ISUSA, High Chief (Amb) Chimezie Njoku thanked traditional rulers of Mbaise for the recognition of his benevolence and humanitarian contributions towards the people of Mbaise. He stated that the significance of the title is hinged on delivering on the promise of God to Mbaise people.

Hon (Amb) Chimezie Njoku maintained that his responsibility is no doubt onerous, as he expressed confidence that with the help of God Almighty and support from his people, he will not disappoint them if elected into office in 2019.

“The mantle of leadership which I have been called upon to take in Aboh Mbaise State Constituency in 2019 is in consonance with my philosophy of life, for I see it as my life ambition to enhance and restore the dignity of man.

I will live up to the expectations within my capacity as ‘Nkwa Chukwu Kwere Mbaise 1‘ of Mbaise and uphold the high ideals associated with my philosophy of life”, he said.

innonews - October 24, 2020 0
The Youth empowerment programme came in aftermath of the Endsars protest BY EBERE EKECHI After the...

innonews - December 22, 2017 0
One thing reminiscence of the Rescue Mission administration of Governor Rochas Okorocha of Imo State is the systematic introduction of novelty in governance and in...

innonews - April 13, 2020 0
There are emerging dynamics and ongoing political intrigues in the race for Okigwe senatorial contest within the fold of the All...

How Hawkers Caused A Stir At Owerri

innonews - June 26, 2018 0
It was drama yesterday at Wethedral/MCC road when some hawkers engaged in free for all fight that led to traffic gridlock on the road. Here...