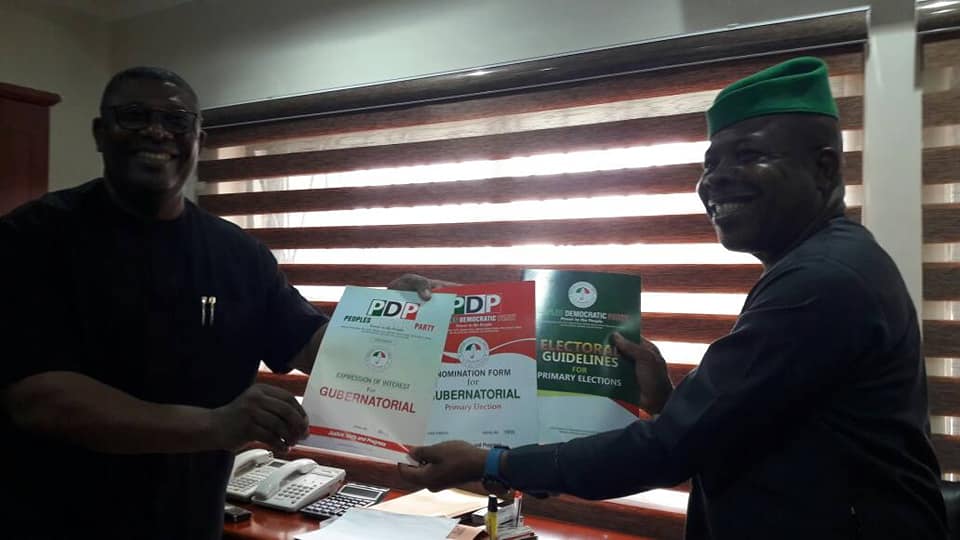 A former Deputy Speaker of the House of Representatives, Rt Hon. Emeka Ihedioha, has said his commitment towards a better and organized Imo State were some of the factors that made him pick the nomination/expression of interest form of the Peoples Democratic Party, PDP.

Ihedioha is staging a second come back to the Imo governorship contest having emerged the party’s governorship flagbearer in 2015.He lost the guber election to the APC candidate, Governor Rochas Okorocha.

Ihedioha re energized his ambition on Tuesday when he picked the party’s nomination/expression forms at the party’s national headquaters in Abuja to seek for the governorship ticket of the party in the forthcoming primaries.

According to a statement, he was quoted to said he desires a more organized Imo where rule of law will reign supreme, quality infrastructure provided, employment and sustainable empowerment given to the people.

He urged Imo masses to remain patient, noting that the days of bad leadership, recklessness and deceit are almost behind us.

He was accompanied by the Members of the National Assembly both past and present.They include: Hon. Hon Ezenwa Francis Onyewuchi, Hon. Henry Nwawuba, Hon. Chudi Uwazurike, Hon. Eddy Mbadiwe, Hon. Gerald Irona, Chief Chinedu Chukwuonye, Hon. Chinemerem Madu, Barr. P.G.U. Madu, amongst other friends, leaders and well wishers who joined him  in solidarity.

Ihedioha: I Will Not Steal, Divert Public Funds If Elected Imo Governor

innonews - October 1, 2020 0
The PDP in Imo State is resisting the antics of those who want the exit of Charles Ugwu as Chairman

FG Grant: Imo, Others Miss Out

Lawsuit Against Buhari: Plot To Sack Araraume From APC Thickens

innonews - November 11, 2022 0
Ifeanyi Araraume, a one -time Senator and top politician from Imo State, risk being suspended from the governing All Progressives Congress, APC.