Home Politics Lugard Osuji: My Political Opponents After Me, Opens Up On Eke Ukwu... 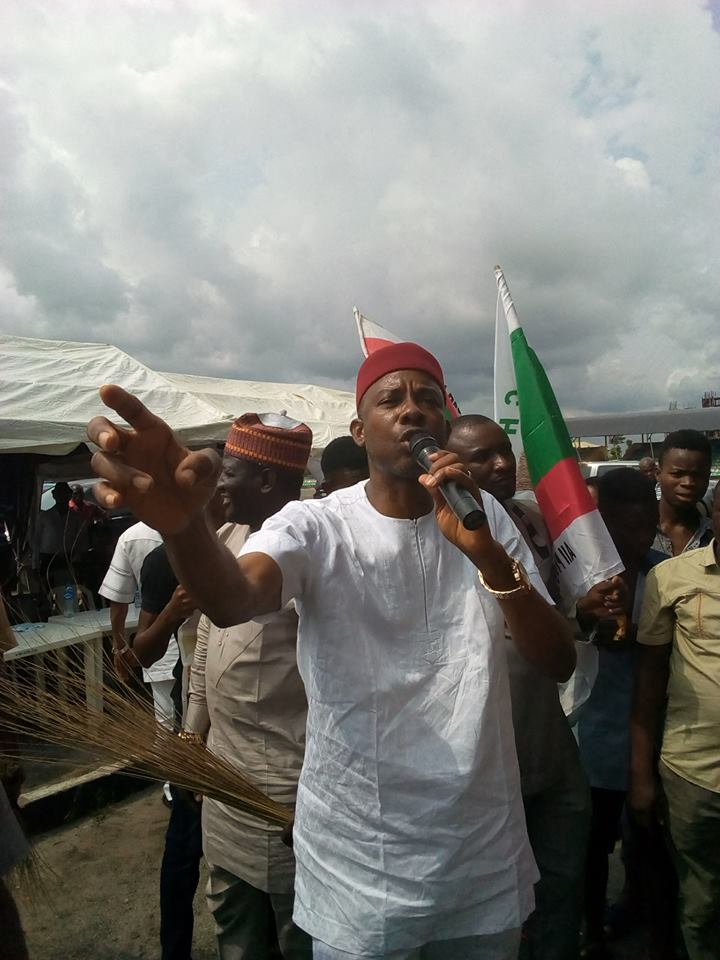 Following media reports that he was pelted with gala sachets at an APC rally at Aladinma ward in Owerri municipal, the Majority Leader, Imo State House of Assembly, Hon.Lugard Osuji has described such reports as fallacy.

Osuji in a statement said there is no iota of truth in the false publication stating that he has represented his constituents creditably thus there is no basis whatsoever for him to be attacked by anyone.

He said such reports were instigated by his political opponents who are scared of his towering political status as he journeys
to be re elected in 2019 for a second term as representative of the people of Owerri in the Imo State House of Assembly.

On the demolition of Eke Ukwu Owerre market, the lawmaker said it is unfortunate that the matter has been twisted upside down by his opponents just to score political points against him.

He said he had maintained his stance that the market be remodelled in line with the urban renewal programme of the Rochas Okorocha administration and for the benefit of the people..

He recalled that even before he was elected to the House, the past administration in the State in collaboration with some Owerri leaders had initiated moves to repackage the market.

He said the past administration was unable to carry out the plan before it was voted out of office.

Osuji explained that before the market was removed he had consulted widely with his people to explain the benefits of remodelling the market for the benefit of all.

He said his desire to seek for a second term is not a personal one but driven by the need for continuity and to erase the notion that Owerri people have been habitual onlookers rather than active partakers in the legislative business of the State House of Assembly.

He said the last time an Owerri indigene rose to a principal position in the House of Assembly was during the reign of late Dee Sam Mbakwe when late Nze H.S.K Osuji was the Majority Leader.

He said single tenure has denied the people of Owerri huge political benefits as the municipality stand to be elevated to the position of Speaker of the House if he is re elected.

The lawmaker stated that the past four Representatives of Owerri municipal in the House of Assembly, collectively initiated seven bills compared to over 37 bills he initiated in his first term which remains an unprecedented record.

He said this is aside several motions and his enormous contribution on the floor of the House not just for his people but on key issues affecting the State.

He stated it is on record that he has remained a strong voice in the House of Assembly by sponsoring the motion on Hate Speech at conference of State Houses of Assembly which was attended by lawmakers from various parts of the country.

He recalled how he has given out loans to the needy and less privileged, built a Health Centre for his community and initiated the creation of administrative centres to resolve the mutual suspicion between indigenes and non indigenes in the municipality in addition to the creation of autonomous communities.

Osuji also drummed support for Uche Nwosu describing him as the bridge for the younger generation to climb to the ladder of leadership in Imo State.

innonews - March 3, 2018 0
Governor Rochas Okorocha has said that Okere Uzochukwu, a man who claimed to be a member of the All Progressive Congress, APC in Imo...

innonews - September 27, 2018 0
The Peoples Democratic Party, PDP in Imo State will hold its governorship primaries at the Dan Anyiam Stadium, Owerri. Over 1,000 delegates are expected to...