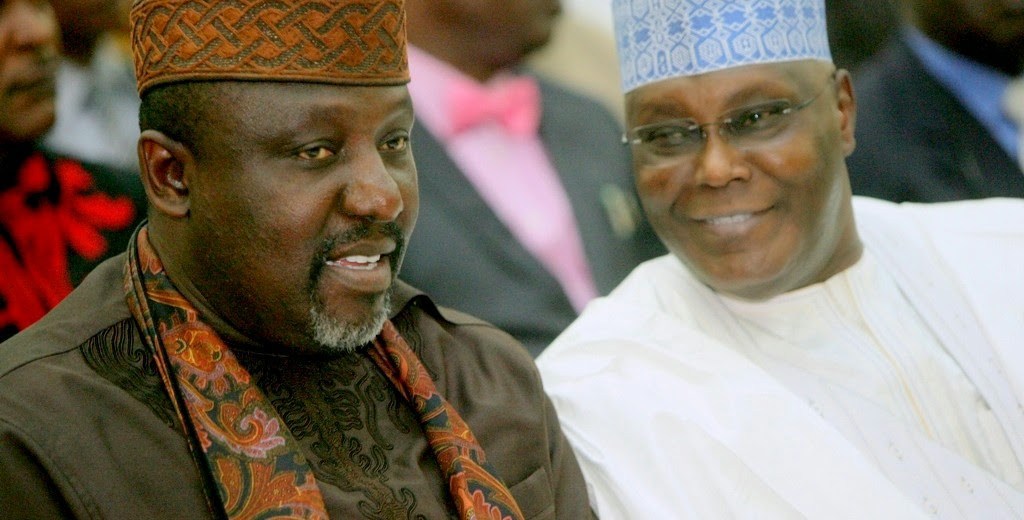 Barely few days after former Vice President, Atiku Abubakar visited Imo State chapter of the Peoples Democratic Party, PDP in furtherance of his nationwide consultations for his presidential ambition, Imo State Governor Rochas Okorocha has reacted to the visit of the former number tow citizen of the State.

Atiku had during his consultations with PDP chieftains in Imo State reportedly assured that the party will recover power from the governing All Progressive Congress, APC in Imo State.

The Governor through a press statement signed by his Chief Press Secretary, Sam Onwuemedo, said the former Vice President should have gone ahead with his consultations without “scratching him”

Part of the statement reads “What we do not take from anybody is blackmail against the government of Rochas Okorocha. We would do our best to set the record straight. The former Vice-President would have done his meeting without scratching the governor and the government he heads in the State. And that is where we come in.

“The former Vice-President therefore leave Imo and Governor Rochas Okorocha alone and face his worrisome challenges. And if he does not know, Governor Rochas Okorocha will defeat him in any part of the Country including his Adamawa State in any election involving two of them. He does not therefore have what it takes to lead any struggle that will return the PDP to power in the State or the Country in 2019. That promise was a false one”

The statement continued “To say the least, that promise of returning Imo to PDP was very deceitful knowing full well that in 2011 Rochas ran on the ticket of APGA that had no structure on ground and defeated an incumbent PDP governor with a very wide margin. In 2015, he took the soul of APGA to merge with other parties to form APC and defeated two powerful Candidates of PDP and APGA, even with the PDP Candidate having the Federal might behind him. Interestingly Alhaji Atiku Abubakar was not in exile when all these happened.

He declared that the PDP is dead in Imo State.

“Imo PDP is dead. The monumental achievements of Governor Okorocha in less than eight years have destroyed the Imo PDP because the Party has no claim again to make before Imo people.
When PDP was in power in the State the Imo Airport was an eyesore, but today it has become an International Cargo Airport with all the facilities available and Courtesy of Rochas Okorocha’s administration. The former Vice-President would have demonstrated statesmanship by commending Rochas Okorocha for that feat” the statement stated.

The Governor enumerated some of his achievements while in office.

“Again, all the flyovers and tunnels Alhaji Atiku passed through in Owerri were not there when the PDP was in power for twelve years. The twelve and eight – lane roads the former Vice-President saw in Owerri when he came were not there when the PDP held sway. The free education that has raised the school population of the State from 381,000 in 2011 to over one million in 2017, was not also there under the PDP” the statement stated.

He said Imo people are on his side and urging the former Vice President o ask the PDP in the State to publish their achievements in the last 12 years in office.

Rumbles In Imo PDP Over Congress,Plot To Sack Senator Anyanwu May...

innonews - March 10, 2020 0
BY: JANE IWU There are clear indications that plot to expel Senator Samuel Anyanwu from the Peoples Democratic Party,...

innonews - September 18, 2017 0
PRESS RELEASE The Imo State government has said about one million women marched on the streets of Owerri, Imo State capital in solidarity for Governor...

Charly Boy: Fear Of Buhari Did Not Compel Me To Leave...