Home Politics 2019:How Next Imo State Governor Will Emerge- AIPA 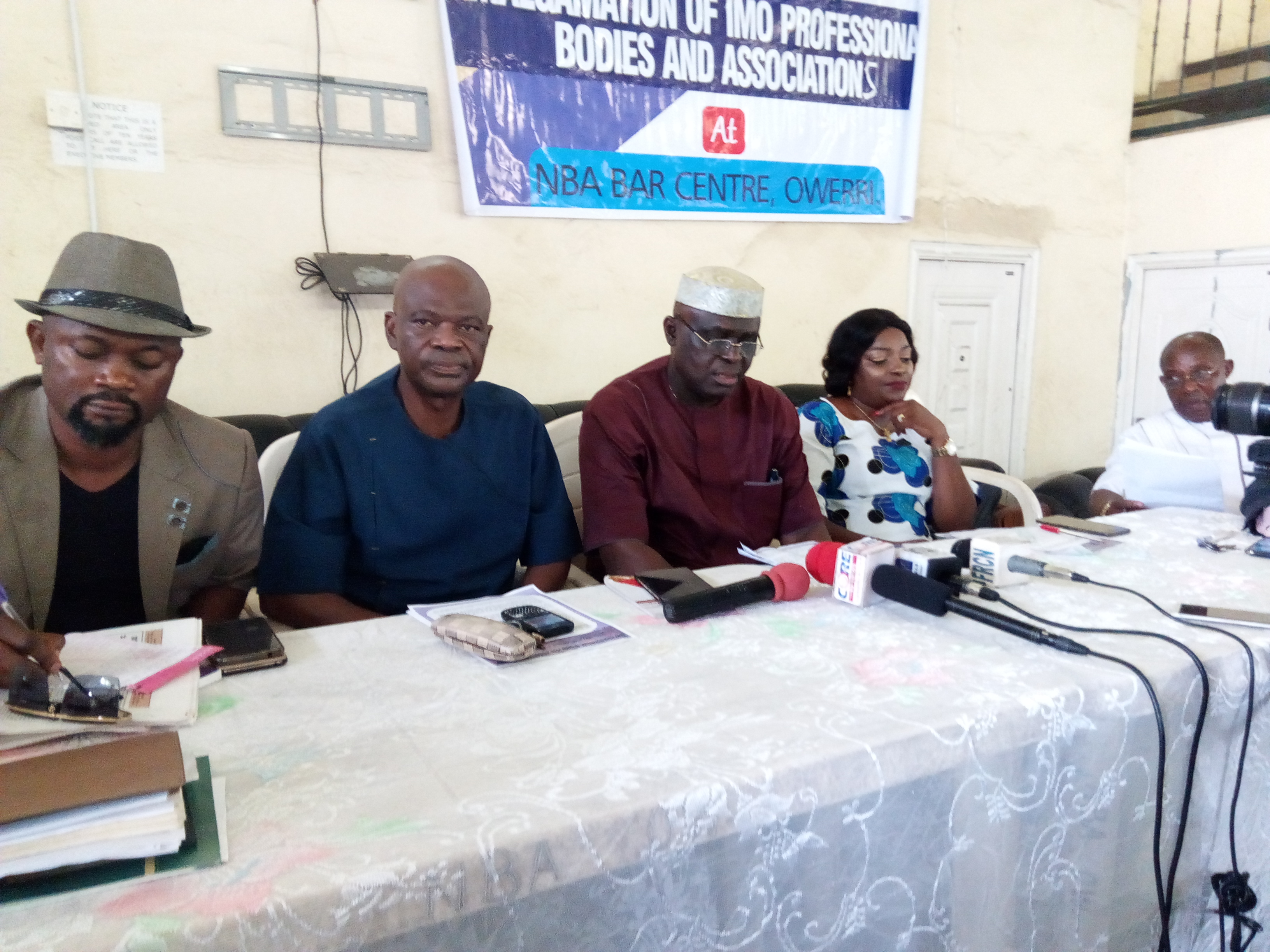 A template that would lead to the emergence of the next Governor of Imo State has been unveiled.

The 8 point template was revealed by the Amalgamation of Imo Professional Bodies and Association (AIPA) at a news conference in Owerri, Imo State capital.

Speaking to newsmen on the template, Chief Emeka Diwe, Co- ordinator of the Amalgamation, he said the need for the template was driven by the necessity to get Imo State out of the doldrums and launch it among the league of prosperous States in Nigeria.

He said AIPA represent the Imo masses and hold the mandate of their various organizations and intend to notify Nigerians of the collective resolve of Imolites to go all out for the enthronement of good governance.

He said a committee on Template and Strategy headed by a former Chairman of the Nigeria Union of Journalists, Chief Fidel Onyeneke carried out the task of scrutinizing the records and antecedents of would be Governor of the State and came up with the template “that will be the mirror the incoming leaders will be viewed”

According to him, points will be allocated to the template and “there will be a systematic collection of data from the research to be conducted on these candidates. These will be analyzed to give a percentage rating.

The template as released by AIPA prescribe the following criteria:

• Technocracy/Experience (15%)– He/She must be one known for effectiveness and efficiency in the management of human and material resources acquired through Civil or Public Service or the private sector. Someone who is peoples driven and can be held accountable for consistent and cohesive policies

• Integrity, Morality and Character (30%)– He/She must be a person known to be of very high integrity, good moral standing and impeccable character, with fear of God and track record of peaceful disposition. One who gives evidence of personal humility, who possess the ability to reason and persuade, who shows promise to govern with wisdom and strength even in the face of opposition

• Rotation And Spread (10%)– In selecting the next Governor of Imo State, the principles of justice, equity will be taken into consideration by all political parties and stakeholders.

• Financial Standing (10%): The next Imo Governor must have genuine and verifiable means of livelihood and must not have been adjudged bankrupt by a competent court or Tribunal within or outside Nigeria

*Knowledge of Imo State/Development Blueprint(10%): The next Imo Governor should be a person who possess clear understanding of the culture, landscape and adequate knowledge of Imo people and their challenges. He/She must have articulated a comprehensive roadmap for the social and political regeneration and economic resurgence of Imo State

• Process of Emergence (5%)-The process the candidate emerged from will be x- rayed to ascertain if internal democracy was strictly adhered to.

• Quality of Party Manifesto (10%): There has to be a clear cut roadmap of capturing concise, workable and realistic goals that will be totally people centered, showing clearly a value driven leadership, passionate at developing the State while growing its economy

On factors that led to the template, Diwe said “We believe that the sorry state of our education, economy, healthcare and infrastructure is a fit justification for us as a people to reflect aloud on the character of leadership required for a re renascent Imo State.

“We believe that good governance can be realized only when people imbued with the right attributes are elected to govern” he stated.

Reacting to a question, Chief Diwe assured that all members of AIPA have subsumed their political inclinations in a bid  to ensure that  the process of ensuring the best among the litany of governorship aspirants emerge as the State Governor in 2019.

In his remarks, Chairman of the template and Strategy Committee, Chief Fidel Onyeneke assured that the process will be devoid of any form of manipulation.

Speaking to this newspaper in an interview, the President of National Youth Council of Nigeria, Comrade Isdore Opara said the template will give Imolites a direction in choosing who will be the Governor of Imo State.

He said the template will take Imo State to the next level advising political parties to be mindful of candidates that will elect at their primaries.

Sixty One Years Of Profligacy. BY RICHARD ODU