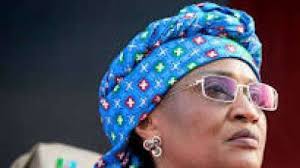 She also resigned her membership of the ruling All Progressive Congress, APC.

In her letter, the former Minister thanked the President for the opportunity given to her to serve the country.

Senator Alhassan was on Thursday disqualified from taking part in the APC governorship primaries in her home state of Taraba.

She recalled that she was duly screened and cleared before her appointment and had notified Mr. President of her desire to contest for the Taraba governorship seat.

The former Minister claimed that up to the point of collection of Nomination and Expression of Interest form and mobilization for the presidential and governorship primaries, she informed the President

She said she became troubled when she was disqualified by the APC from contesting the governorship seat when no reason was given for the action.

Girl Who Went Mad After Alighting From A Vehicle In Owerri...