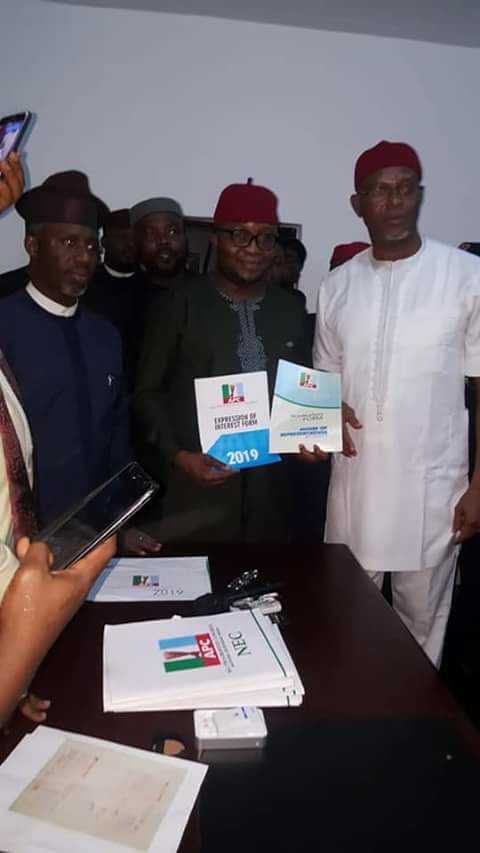 Aspirants mainly appointees in Governor Rochas Okorocha’s cabinet vying for various elective positions  have been endorsed as candidates ahead of primaries of the All Progressive Congress, APC.

Among those adopted include the Majority Leader, Imo State House of Assembly, Hon. Lugard Osuji for a second term as representative for Owerri Municipal, Hon Ralpheal Nnanna Igbokwe for Ahiazu/Ezinihitte Reps seat and many others.

In a related development, Uche Nwosu, Chief of Staff and son in law to Governor Rochas Okorocha has obtained the APC Nomination and Expression of Interest form for governorship.

Nwosu has been Governor Rochas Okorocha choice as successor in 2019.

Despite the uproar his endorsement had generated, Nwosu has marched on with his ambition.

Days before he secured the forms, some youth groups had been jostling to secure the forms for him.

However, rumours surfaced on the social media that another Okorocha loyalist and Secretary to the Government of Imo State, George Eche has also secured the APC Nomination and Expression of Interest forms . This could not be verified as at press time.

Nwosu was accompanied to the APC national secretariat to procure the forms alongside House of Reps member, Hon Ralpheal Nnanna Igbokwe, Deputy Speaker, Imo State House of Assembly, Hon. Ugonna Ozuruigbo and other.

innonews - March 3, 2020 0
Minister of State for Health, Senator Olorunnimbe Mamora, has cautioned Nigerians on the use of herbal products to protect themselves from Coronavirus...

innonews - November 23, 2017 0
The division in Imo State chapter of the Peoples Democratic Party, PDP may have continued unabated over the forthcoming national convention scheduled to hold...

Akachi Statue, Though Of No Value, I Never Ordered Its Demolition-...

innonews - May 30, 2019 0
Governor Emeka Ihedioha says he never instructed the pulling down of Akachi statue near Aba Road, Owerri. The...