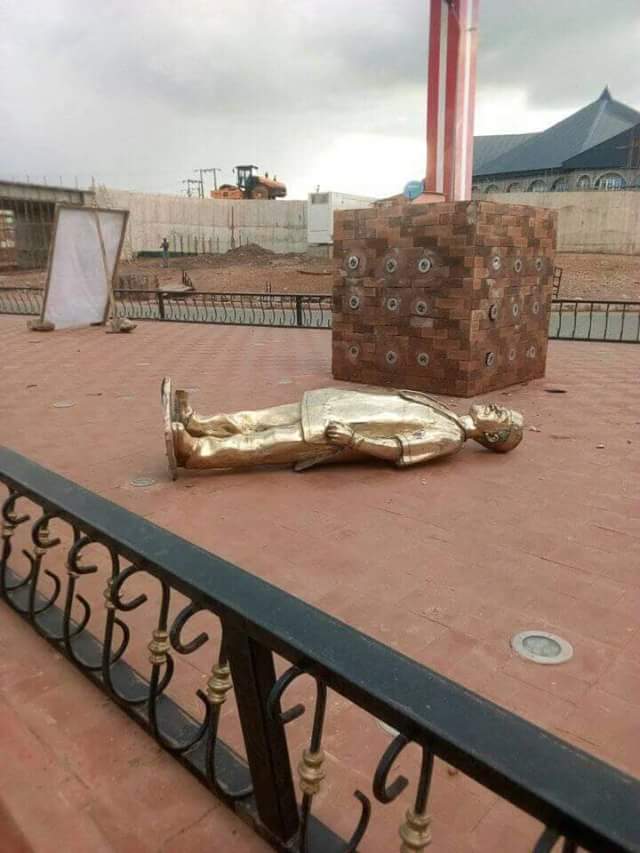 A middle aged man has been arrested by officers and men of the Nigeria Security and Civil Defence Corps for carting away all fancy lights at Abacha round about, Gunning Road, Abakaliki, Ebonyi State.

He claimed that he was sent by the “Holy Spirit”

Eye witness account said the man came to the vicinity with a big Hammer and other instruments. He climed the artificial water fall and began to destroy the items.

Before he started destroying the items, he declared that evil concoctions and charms were buried in the Roundabout before the fancy lights were installed. He also claimed that Abakpa traders and Abakaliki people were held to a ransome by the evil forces in the state from progressing and even asking for their rights.

It was gathered that he removed some materials from the ground and assured the onlookers who were majorly traders in the market that, their liberation is assured having removed the obstacles on their way.

He pleaded with the people not to worry about what will befall him as he was sent by the Holy Spirit and that he will not be abandoned by his sender.

innonews - May 1, 2020 0
Chief Chuks Ajaelu, is a chieftain of the Peoples Democratic Party, PDP in Imo State. He holds the enviable record of not...

innonews - February 8, 2022 0
It is expected that when ascertaining leadership qualities in a man, one must consider integrity, intelligence and energy. If a man does...