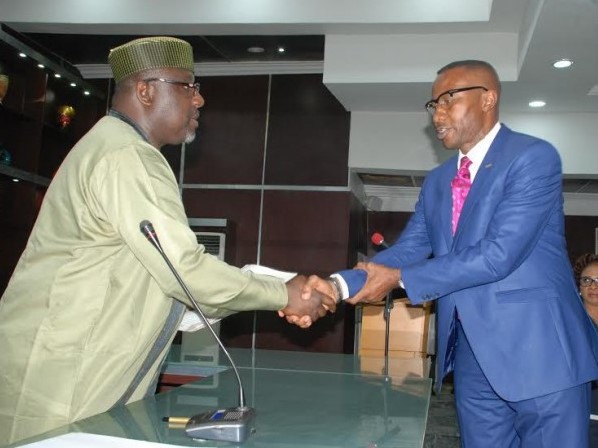 Governor Rochas Okorocha has made it cleat that he is not aware of the speculated governorship ambition of Secretary to the Government of Imo State, Mr. George Eche.

Eche was rumoured on the social media to have joined the governorship race and on the verge of buying the APC Nomination and Expression of Interest form for the governorship.

Okorocha in a statement by his Chief Press Secretary, Sam Onwuemedo said it is false that he told Eche to join the governorship contest.

The Governor had announced his support for Uche Nwosu, his Chief of Staff and son in law for 2019 Imo governorship

“The Secretary to the State Government Mr. George Eche was quoted to have Claimed that the governor, Owelle Rochas Okorocha has asked him to Contest the 2019 governorship election. And for this claim, the governor has been inundated with calls over the authenticity or otherwise of this claim by Mr. Eche.

“To say the least, the claim is totally false. It is not true. The governor never told Mr. Eche to go for the 2019 governorship either directly or through a proxy. In other words, the governor is not aware of Mr. Eche’s governorship aspiration.

“And if Mr. Eche is actually Contesting the governorship, he is doing so as an Imo man or as a Nigerian exercising his constitutional right and that has nothing to do with the governor.
Before now, what Mr. Eche had told the governor he was going to Contest is the House of Representatives for Aboh Mbaise/Ngor Okpala Federal Constituency, and if he has changed his mind for another position, the governor does not know.

“And for the sake of emphasis, the governor is not under any pressure over the governorship bid of Chief Uche Nwosu. Nwosu has collected his nomination forms, and will face APC delegates for the primary and if he wins the primary, he will face Imo electorate in the election proper. And if Imo people elect him to be their governor, so shall it be.

“That is to say, Uche Nwosu’s fate over the governorship of the State will be decided by the Almighty God first, then APC delegates for the primary and Imo people at the main election. So, the issue of the governor being under pressure over Nwosu’s governorship aspiration is neither here nor there.

innonews - April 22, 2018 0
In line with his determination to realize his senatorial ambition, the member representing Owerri Federal Constituency, Hon Ezenwa Onyewuchi has constituted a formidable team...

Iwu Reveals Where Covid 19 Cases Are Treated In Imo