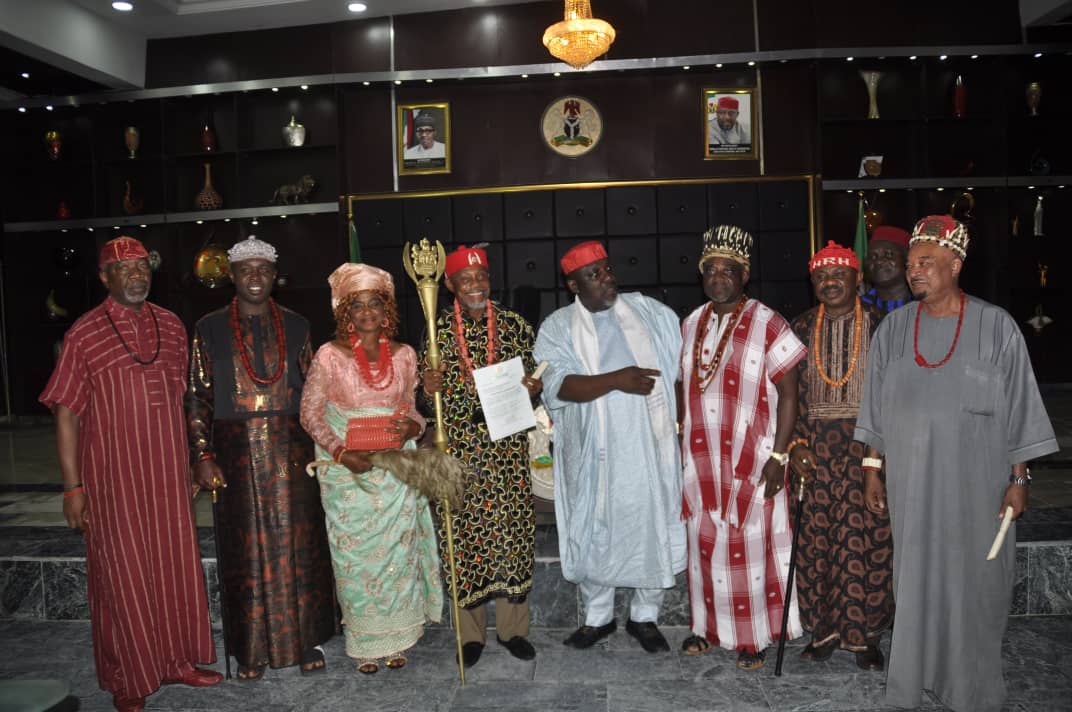 The Late Eze Njemanze was the paramount ruler of Owerri.

“Governor Rochas Okorocha has handed over the certificate of Recognition and Staff of Office to HRH Eze Peter Ezechikere Njemanze as the new Traditional Ruler for Amawom Autonomous Community in Owerri Municipal. The new Eze replaces the late Eze Emmanuel Njemanze, the Ozuruigbo the 5th, of the autonomous community who died on May 10, 2016.

“In his speech at the historic event, Governor Rochas Okorocha told the new traditional ruler to cooperate with the other traditional rulers in Owerri Municipal for Peace and Development urging him too to accommodate all, both indigenes and non-indigenes since Owerri is the Capital of the State people from far and near could come and live in.

“The governor noted “the Njemanze family is a great dynasty everyone in Imo State is familiar with. It is about one year and five months today when the Late Eze died. Which means the one year period within which to mourn the Late Eze has come and passed. And naturally there is need to fill in the gap”.

He continued “So, I’m happy that you have in your spirit, the Rescue Mission Agenda which is to uplift the suffering masses and the downtrodden in our society. I want you to be a champion of this vision for which Rescue Mission stands. I also would urge you to cooperate with your other colleagues, the Ezes of the Municipality especially the four other Ezes who have played a very key role in ensuring your emergence because it was a task to really find someone who can occupy this great throne as Eze Amawom”.

He remarked “today, the entire people of Amawom have unanimously elected you to replace your Cousin who died in 2016. And it is for that reason that you have passed through all the processes to confirm you as His Royal Highness. You must know that to whom much is given, much is expected. Amawom people are in dire need of leadership as the vacuum created by the death of the Late Eze has left most of the Amawom people not speaking with one voice”.

The governor further said, “We’re not unmindful of the fact that some myopic politicians who like to do things the same old ways have failed to give us necessary support desirable of any sitting government, but they have not deterred us in discharging our responsibilities. We shall be patient to deal with all matters relating to opposition or to make them understand our vision and mission and this will not be farfetched from now”.

The governor added, “I must let you know that Owerri is no longer the property of Owerri people but the property of entire Imo State and that is the blessing God has brought upon you people. So for those who think that Owerri belongs only to you people, they are not Completely right because this is our capital. And this is the reason over sixty percent of the total income of Imo State for the past seven years is invested in this place because it is for all of us as a Capital”.

In his speech, the new Traditional Ruler HRH Eze Peter Njemanze assured to ensure Peace and carry every one along in the scheme of things in the Community and commended the governor for the monumental achievements recorded by the Rescue Mission Government in the State, assuring too that he would work in harmony with the State Government in the overall interest of his people in particular and Imo people in general.

innonews - August 16, 2021 0
Federal lawmakers, comprising three Senators and eleven members of the House of Representatives from Imo State, are trailing their counterparts from Abia...

I m Aware Of Plans To Undermine My Govt, Ihedioha...

innonews - June 14, 2019 0
Imo State Governor , Emeka Ihedioha, says his administration is not oblivious of plans by enemies of...

innonews - May 29, 2019 0
Rough times may await administration officials of Governor Rochas Okorocha, as Governor Emeka Ihedioha has made it clear that those...