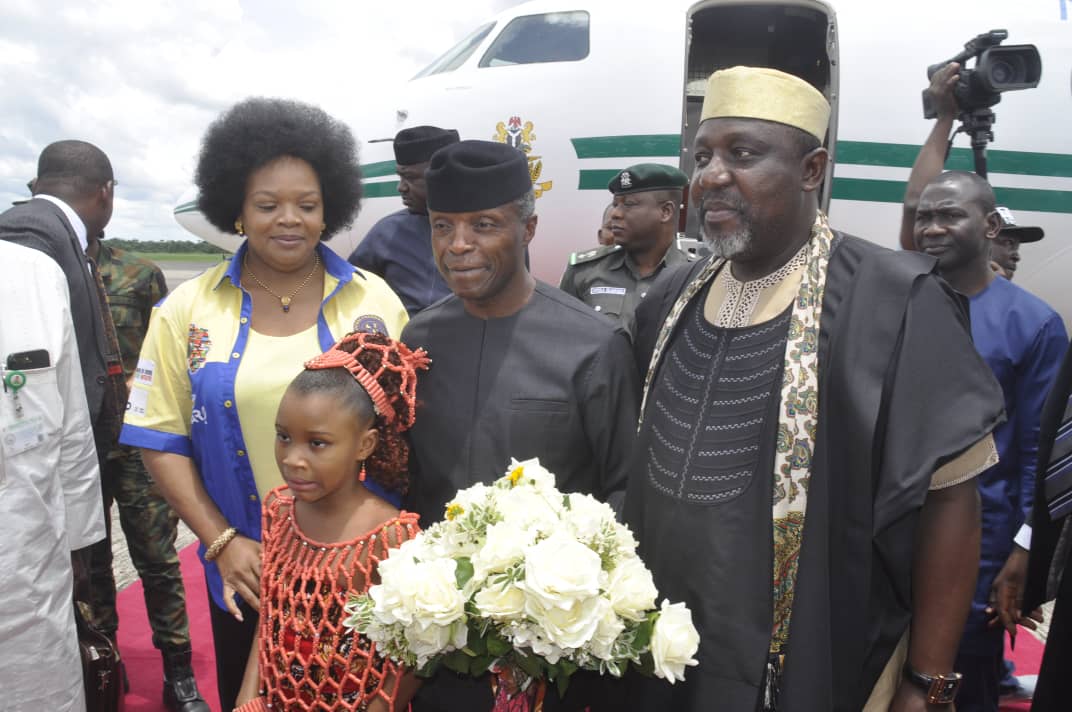 Vice President, Professor Yemi Osinbajo says that the Federal Government which President Muhammadu Buhari heads does not segregate in its responsibilities to states irrespective of religion or even party affiliation, adding that it was the oath the President took on the day they were sworn-in.

This is contained in a statement released by Governor Rochas Okorocha’s Chief Press Secretary, Sam Onwuemedo.

He said “This is the oath the President took on the day we were sworn-in. The President said this Country belongs to all of us and for that reason no State will be segregated against as been done in the past. There will be no discrimination as a result of party or religion. This gave rise to the formation of the economic advisory committee that I chair. Every State is being treated equal as of today”.

Prof. Osinbajo spoke while on a Courtesy Call at the Eze Imo Palace after he had inspected the International Cargo Airport on arrival for a two – day working visit to the State, weekend, explaining that the Cargo Airport is an important infrastructural development because of its commercial importance.

He said “Facilities at the International Cargo Airport are World Class. We have looked at how to cooperate even further and certainly we are going to look at how to involve the Private Sector and bring in other agencies of the Federal Government in the running of the Cargo Airport,

“I am equally here to take another step in our social investment program. The government of President Buhari is poised to give a helping hand to the down trodden and petty traders in our society. Men and women who are involved in various crafts are given a fair chance to succeed. I am here to inaugurate the trader money scheme. This scheme is a loan that we give to the petty traders across the Country. We will be giving a minimum of thirty thousand naira each to petty traders in Imo State. The scheme is for the smallest traders. This is a Federal Government effort to eradicate poverty by putting resources in the hands of the poor with a view to helping to than develop their little businesses.” he said

Governor Rochas Okorocha in his speech appealed to the Federal Government to refund to Imo State government the money used in building the Cargo Airport, stressing that the realization of the International Cargo Airport of that class is one of the laudable achievements of the Rescue Mission Government in the State.

He remarked “In the spirit of the partnership between the State government and the Federal Government, I plead with the Federal Government to refund to Imo State some of the monies used in establishing Federal Institutions and Projects across the State, notably Imo International Cargo Airport and the Hospitals donated to Military and Para-military agencies”.

The governor added “I am very happy that you are here despite your tight schedule especially now that you have the big task of going around the Country visiting states and communities ravaged by flood.

Ihedioha Vs Uzodinma: What Happened At Supreme Court Today

innonews - February 18, 2020 0
BY: RALPH EJIMKONYE, ABUJA The Supreme Court was filled to the brim Tuesday morning as the apex court adjourned...