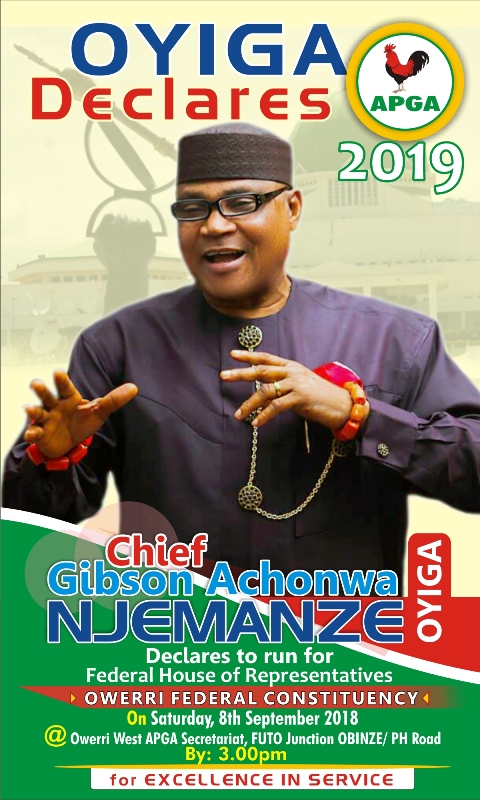 He assured that he will give his people effective representation, stating that he would ensure that the dividends of democracy they have been yearning for will get to their doorsteps. He said with such good legislation, there would be rapid development in the constituency.

Oyiga stated that with his vast experience in politics, administration, commence, industry and entreperenuership, he is in better fit to bring positive changes within Owerri Federal Constituency.

He promised  do a lot to strengthen APGA in Owerri federal constituency, adding that he would focus attention on youths and women empowerment, assuring that APGA executive members in the federal constituency will be placed on monthly salary in the first four years of his representation

“I will build houses to accommodate Owerri people especially at Abuja, to make them feel at home when they come around.

“I have the capacity to give you fair, sound and quality representation, and sponsoring and supporting human oriented bills at the Green Chambers of the National Assembly will be my hallmark to address some ugly issues and make citizens have good sense of economic, social, political and educational belonging”

Oyiga solicited for their support, stating that he is going to House of Reps with the interest of the people at heart and for the collective good of the people. He vowed never to disappoint them.

In his remarks, the Owerri West Chairman of APGA, Mr Emeka Nkwoada assured that APGA will have rancour free primaries to field in candidates who will be accepted by the electorate to win elections.

According to him  “In APGA credible persons will be elected in the primaries to be victorious in the 2019 election.

“There will be no imposition of candidates in APGA for we believe and stick to actual and internal democracy and human welfare and aspirations.

“Oyiga is a good politician who plays sound politics. He has the capacity to deliver when given the mandate, and all aspirants will be given equal and fair ground to participate in the primaries.

“So, let APGA members remain firm and strong as we politic for the good of all”

innonews - April 16, 2019 0
Prince Osisioma Foundation has donated a set of personal computers to the ICT department of the St Mary Anglican Secondary...

Ohakim Warns Okorocha For Desecrating The House Of God

innonews - June 5, 2018 0
Former Imo State Governor, Ikedi Ohakim has taken a swipe at Governor Rochas Okorocha by posturing as a priest of the Most High God...