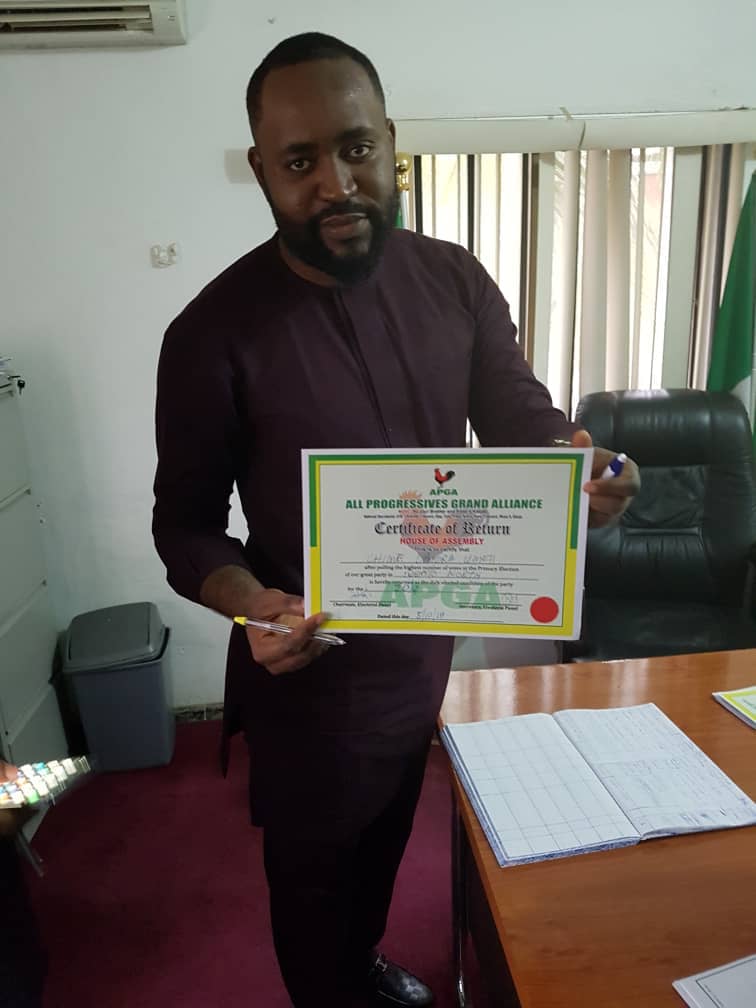 The people of Ideato North have taken turns to shower encomiums on the leadership of the All Progressives Grand Alliance, APGA. The commendations are coming on the heels of the party’s decision to restore the mandate which was overwhelmingly given to the youthful entrepreneur, Hon. Obiora Umeh, by the delegates to stand as the party’s flag bearer for the Imo State House of Assembly, Ideato North Constituency, come 2019.

Reacting to the development, a leader in the party, Chief Chukwuemeka Ben Izuogu, said the leadership of APGA has rekindled collective faith in the party and has amply demonstrated that the party is an institution of fairness, justice and genuine democracy.

Recall that the APGA ticket for Ideato North Constituency has been mired in controversies following the manipulation of the election result by the returning officer sent to conduct the primary election.

Addressing newsmen in Abuja after obtaining his certificate of return from the National Headquarters of the party, Hon. Umeh said the implication of his victory is that God has remembered the people of Ideato North.

“Our people have endured abject deprivation and inexplicably poor political representation even when we have the best human resources to deliver good governance. My victory is a clear verdict that the days of visionless representation are irreversibly over.

“There are so many things we can do to give a better life to our people. Currently, almost all the industries in Ideato North have become comatose as a result of infrastructural decadence. Through the instrumentality of the legislature, we can enact laws that will revive them under Public-Private Partnerships (PPPs), especially by ensuring that the obligation of the state government to provide associated infrastructure and to be the guarantor for offtake agreements is met. With that alone a lot of young people would have been taken off the streets and a brighter future assured to them,” he said.

The renowned philanthropist also urged APGA faithful in Ideato North to remain steadfast, and assured them that he will definitely bring victory to the party come 2019.

innonews - November 15, 2018 0
Money politics and campaign finance remain topical, disconcerting and divisive issues in Nigeria. The challenges they pose are further compounded by vote-buying and prohibitive...

innonews - May 21, 2022 0
The propensity of the subconscious mind is very dynamic and unimaginable. Many expert claims that most of us use only ten percent...

Re: His Excellency And The Naked Man. BY COLLINS UGHALAA

innonews - February 12, 2018 0
While working in Nigeria Moment newspapers as Managing Editor/Editor-in-Chief, one of the very few persons I related with as friend was Mr. Chuks Ofurum....

innonews - January 11, 2019 0
The Governorship candidate of the All Progressive Congress, APC in Imo State, Senator Hope Uzodinma, will on Monday, 14th January, 2018...