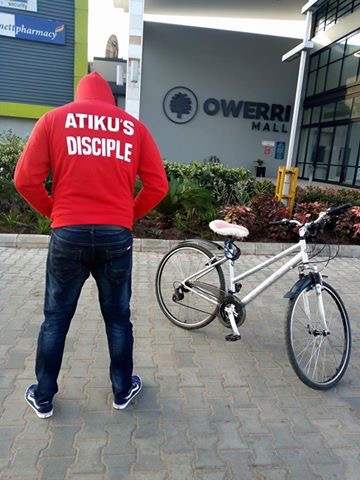 Online reports have revealed how a supporter of Presidential candidate of the Peoples Democratic Party, PDP, Atiku Abubakar who rode a bicycle from Owerri to Abuja was hospitalized.

The supporter, Mr. Uche Dubem Ohakwe, is a graduate of Psychology at Imo State University. He was said to have taken off from a popular shopping Mall in Owerri, Shoprite.

He arrived Abuja last week after riding the bicycle for six days.

He was quoted to have said “When I woke up I found myself in the hospital; the National Hospital. Series of tests were conducted and at the end of the day my BP was about 300. But now I am getting okay,” he said.

He said he was one of the Nigerian youths that had benefited from the scholarship scheme sponsored by Atiku.

“I did not do this for money, if it is for money, I know how and where to get it. So this is a call to all Nigerians, especially the electorate not to make another mistake,” he said.

innonews - April 27, 2020 0
BY GERARD UCHE Governor Hope Uzodinma of Imo State says a cabal exists within the payroll system of...

innonews - December 4, 2021 0
God-fatherism is one of the hindrances to true democracy in Nigeria. It is a system of manipulation in leadership where by an...