Home Sport EPL: Why Mourinho Was Angry After Chelsea Equalizied 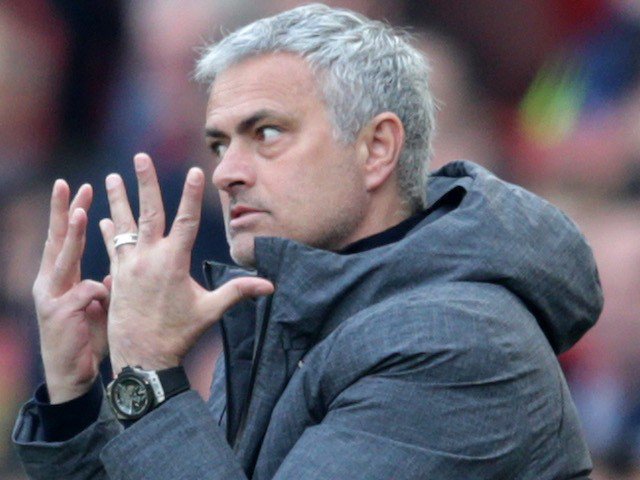 Jose Mourinho described conceding a 96th minute equaliser to draw 2-2 at Chelsea as an “awful result” for Manchester United, but played down a melee involving players and staff from both sides after Ross Barkley’s late strike.

Mourinho had to be restrained by stewards when one of Chelsea boss Maurizio Sarri’s backroom staff, Marco Ianni, ran in front of the Portuguese to celebrate as the hosts salvaged their unbeaten start under the Italian. The United manager then also gestured with three fingers towards the Chelsea fans in reference to the three Premier League titles he won for the club in two spells in charge.

“I did not get respect back from Chelsea (fans) but that is not my responsibility,” said Mourinho. Sarri said he had gone with Ianni after the match to offer his apologies to Mourinho.

“After the match I have spoken with Jose and I understood that we were wrong,” said Sarri. “I (have) spoken immediately with the member of my staff and then I bring him to speak with Mourinho and to say sorry to Mourinho.” Mourinho accepted that apology.

But his frustration at blowing what could have been a huge win in the context of a stuttering season was obvious. The visitors remain seven points adrift of Chelsea, and could fall nine points behind Manchester City and Liverpool should they win their respective fixtures later Saturday. “(It was) not celebrations, but bad education. But I also made mistakes in football matches and I will make more so after the game when he came to offer his apologies, I accept,” added Mourinho.

“A fantastic game with a fantastic result for Chelsea and awful result for us. “We were so much in control, so much the positive team in the second half.” Mourinho’s decision to hand Anthony Martial a start in an attack-minded line-up came good as the Frenchman scored twice in 18 second-half minutes after Antonio Rudiger headed Chelsea into an early lead.

The German defender easily peeled away from Paul Pogba to plant a powerful header past the helpless David de Gea from Willian’s corner. That was the fourth time United have conceded from a corner in the league this season, having also done so in defeats to Brighton, Tottenham and West Ham.

“Players make mistakes and I prefer to focus on the global performance and again my midfield was very good,” added Mourinho on Pogba’s error. It wasn’t so costly this time as Chelsea paid for a lack of killer instinct despite dominating possession for the rest of the first-half. “I am happy with the performance of the team for 60 minutes because for 60 minutes we played our football,” said Sarri. “Then after the goal of 1-1 we haven’t played our football. We only played the long ball and we are not organised to go on the second ball. “In this kind of football, United is better than us so I am really disappointed for the last 30 minutes.”

innonews - April 14, 2018 0
The Headies (formerly known as the Hip Hop World Awards) is a music award that honours outstanding achievement in the Nigerian music industry. The popular...

innonews - December 2, 2020 0
The Appeal Court, sitting in Owerri, has reserved judgement for a later date in an appeal filed by Frank Ibezim, challenging the...

innonews - May 3, 2018 0
*BY CHIDI ABBAH* The All Progressive Congress, APC  in Imo State has dismissed rumours that the scheduled May 5, 2018 ward congress has been called...