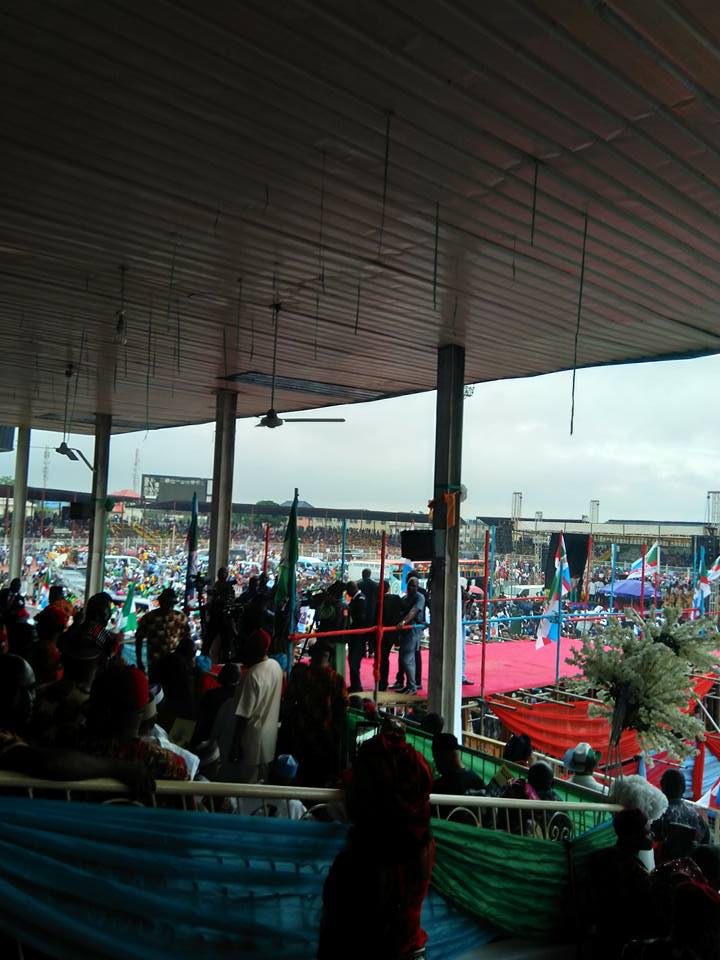 *As November 2 Deadline Draws Near

The unfolding drama in Imo State chapter of the All Progressive Congress, APC is yet to abate. Infact it has increased in tempo and intensity as the party race against time to submit names of candidates of the party to the Independent National Electoral Commission, INEC.

The battle took a newer dimension on Tuesday when Ahmed Gulak, Chairman of APC Governorship primary for Imo State fired fresh salvos on the Imo Governor on the outcome of the governorship primaries in Imo State.

Gulak had featured on a programme on AIT making fresh allegations against the Governor. He alleged that the Imo Governor forced him to sign result sheets during the primary which he refused.

In a swift response, Okorocha in a statement by his Chief Press Secretary described Gulak’s claims as false.

The statement reads in part “On television, Alhaji Gulak told Nigerians how Governor Okorocha gave him prepared results of the Primaries he came to Conduct to sign and he refused. That, his Committee had Seven members and no more twelve. And that Seven aspirants wrote to Confirm what he did and so on.

“And this is the same Ahmed Gulak who told Nigerians and indeed the world on Tuesday, October 2, 2018 that he fled Owerri by 4.30am because there was kidnap attempt on his person. And that he ran away with three members, out of the 12-Member Committee. Gulak never made any other Claim to that effect.

“And it took a former Political Adviser to a former President almost four weeks or twenty-nine days to remember that Governor Okorocha gave him prepared result Sheets to sign and he refused. And could it have been possible for Governor Okorocha to give a man of Gulak’s level prepared result Sheets to sign? Your answer is as palatable as mine. In any case, Rochas Okorocha does not do such funny thing.

*OPTION B ON THE CARDS?*

This latest development came up as indications are becoming clear that option B may may be on the cards of the Governor if in the event his preferred candidate, Uche Nwosu fails to get the party’s governorship ticket.

Though there is still high optimism among party faithfuls loyal to the Governor that all hope is not lost, the Okorocha camp had protested strongly when the National Working Committee, NWC  of the party dropped some candidates their camp and allotted them to candidates in the Imo APC Coalition under the automatic ticket window.

Okorocha had also on Monday accused some non party members including his predecessor, Achike Udewa, Catholic Bishop of Owerri Diocese, Archbishop Obinna, a monarch,Cletus Illomuanya and a former governorship aspirant in the State, Ezekiel Izuogu of working for his opponent, Senator Hope Uzodinma.

Aside Imo State, two other State Governors Ibikunle Amosun of Ogun State and Abubakar Yari  of Zamfara State are also in a survival battle to have their anointed candidates scale through the hurdle.

This newspaper had reported on Sunday that top level moves are ongoing to resolve the impasse in troubled APC States following worrisome indications that the affected State Governors may move to another political party if their candidates do not pull through.

A reliable source revealed that the Governor’s camp including those who have secured APC tickets from the House of Assembly, House of Representatives and Senate will dump the APC for another party if Uche Nwosu is not announced the governorship candidate of the party on November 2nd.

” All these Abuja politicians scrambling for the governorship ticket of the APC, can they win elections for the party in Imo State. There is no cause for worry” a top member of the Governor’s camp said.

With the seeming collapse of a legal solution following the withdrawal of the presiding judge of an Abuja High Court in the matter, a political option is considered the solution to the matter.

The APC have lost three State Governors and some members of the National Assembly including the Senate President, Bukola Saraki who left the party for the opposition Peoples Democratic Party, PDP. There are fears that if the aggrieved three APC Governors namely Okorocha (Imo), Yari (Zamfara) and Amosun (Ogun) decamp, it would swell the number of Governors who defected from the APC to six.

A top party chieftain told this newspaper in Abuja “That was how the PDP and President Goodluck Jonathan started failing in 2015. The PDP lost five State Governors, the Speaker of the House of Representatives and some members of the National Assembly to the then opposition APC. The PDP never recovered from those defections and the party lost power at the centre.

“The same scenario is repeating itself in 2018. The APC have lost the Senate President and the Speaker of the House of Representatives and other members of the National Assembly to the PDP.Three State Governors of Kwara, Sokoto and Benue  have already left the APC.  If the crisis in the party in Ogun, Imo and Zamfara States are not resolved, the Governors may leave. Can the APC afford this gamble?

“We know the importance and influence State Governors peddle in the States and how crucial they are to the President’s re- election plans. It is a win win situation for the party if they choose a more beneficial political option to this impasse to the satisfaction of the contending forces” he said

innonews - August 14, 2017 0
Real Madrid Star, Cristiano Ronaldo has been handed a five match ban after pushing the referee after his red card in Sunday’s El Classico. The...

innonews - March 26, 2020 0
By David Uka, Abakaliki The Ebonyi  state government said it would close it's land borders with effect...