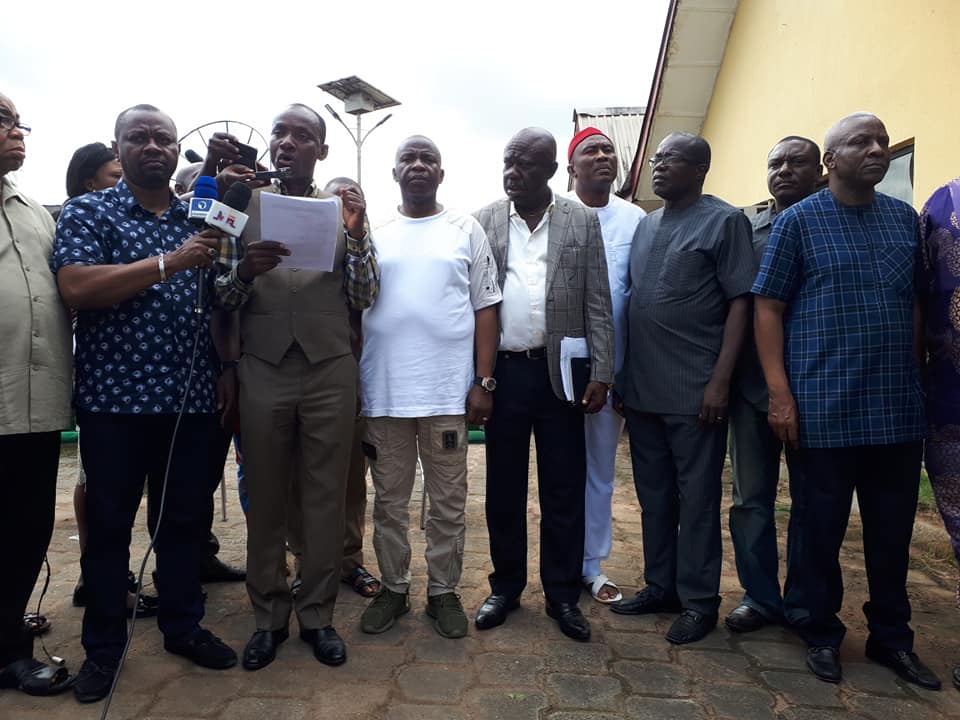 *Confirms Our Story On Plans To Adopt A Consensus Candidate*

The tension in the All Progressive Grand Alliance, APGA in Imo State is yet to abate despite the race against time to beat INEC deadline that all political parties must conclude it’s primaries before October 7, 2018

This newspaper had reported on Monday morning there is turbulence in APGA in Imo State over the failure of the State party leadership to hold its governorship primary and explain the circumstances surrounding its action.

More than 10 of the 13 governorship aspirants had addressed a press conference where they frowned on the development.

Two aspirants, Senator Ifeanyi Araraume and Okey Ezeh did not sign the document where the aspirants expressed grievances on the sloppy manner the guber primary was handled.

Araraume was accused of masterminding a parallel primary held at the Kanu Nwankwo Sports Complex on Sunday night where he emerged winner.

Feelers available to this newspaper had suggested that a Consensus arrangement is on the cards and one of the aspirants, Okey Ezeh may be favoured.

The issue of Consensus may emanate from double sources  judging from the political scenario playing out in the party.

One may emanate from the league of aggrieved aspirants and may be another from the party leadership. How this scenario plays out is better imagined.

A statement by some guber of the aspirants reads:

Gentlemen of the Press,

As you know the APGA Governorship Primary scheduled for October 5 and 6,2018 did not hold. There was no accreditation, or any other activities related to the conduct of the primary in Imo State yesterday. Any claim that primary held in Imo State for the election of APGA Governorship Candidate for 2019 is mere fiction. Any report that aspirants stepped down for any candidate is pure falsehood. We resolved that it is important to protect the image of Ndigbo and the prospect of good governance in Imo State.

Let us inform the public that long ago the aspirants resolved that the governorship candidate for APGA Imo State must emerge from a transparent and credible process. We also resolved that the party’s stakeholders in Imo State can no longer be slaves to political forces outside the state who consider Imo State as a market for their own economic fortunes. We decided long ago to fight for the right of Imo people to determine their fortune.

The failure of the leadership of the party to guarantee a credible primary for Imo APGA is a terrible disappointment. The plot to impose a candidate on Imo APGA will continue to be resisted. Of course, no primary will hold in Imo under a lawless and corrupt process where few persons from outside the State have decided to subordinate our collective interest to the demonic greed of some leaders in the party. We have resolved to present a consensus candidate from amongst the aspirants after due process and consultation between all APGA governorship aspirants and party leaders and structures in Imo State.

This is a new season for Imo State. We are determined to fight till we enthrone good governance in Imo and end the reign of lawlessness and illegality in Imo politics.

The document were signed by the following:

Our Edge Over Cameroon, Rohr Reveals

innonews - July 7, 2019 0
Extra two days rest and getting used to the pitch at Alexandria Stadium, Alexandria were some of the factors which gave Super...

Why I Shunned Chelsea, Sarri For Milan- Higuain

innonews - August 3, 2018 0
Gonzalo Higuian has revealed why he shunned Chelsea and its new Coach, Maurizio Sarri. The Argentine said he chose AC Milan over Chelsea because he...

innonews - October 17, 2021 0
Governor Hope Uzodimma has said that the local government election is about to hold in the State. He gave...