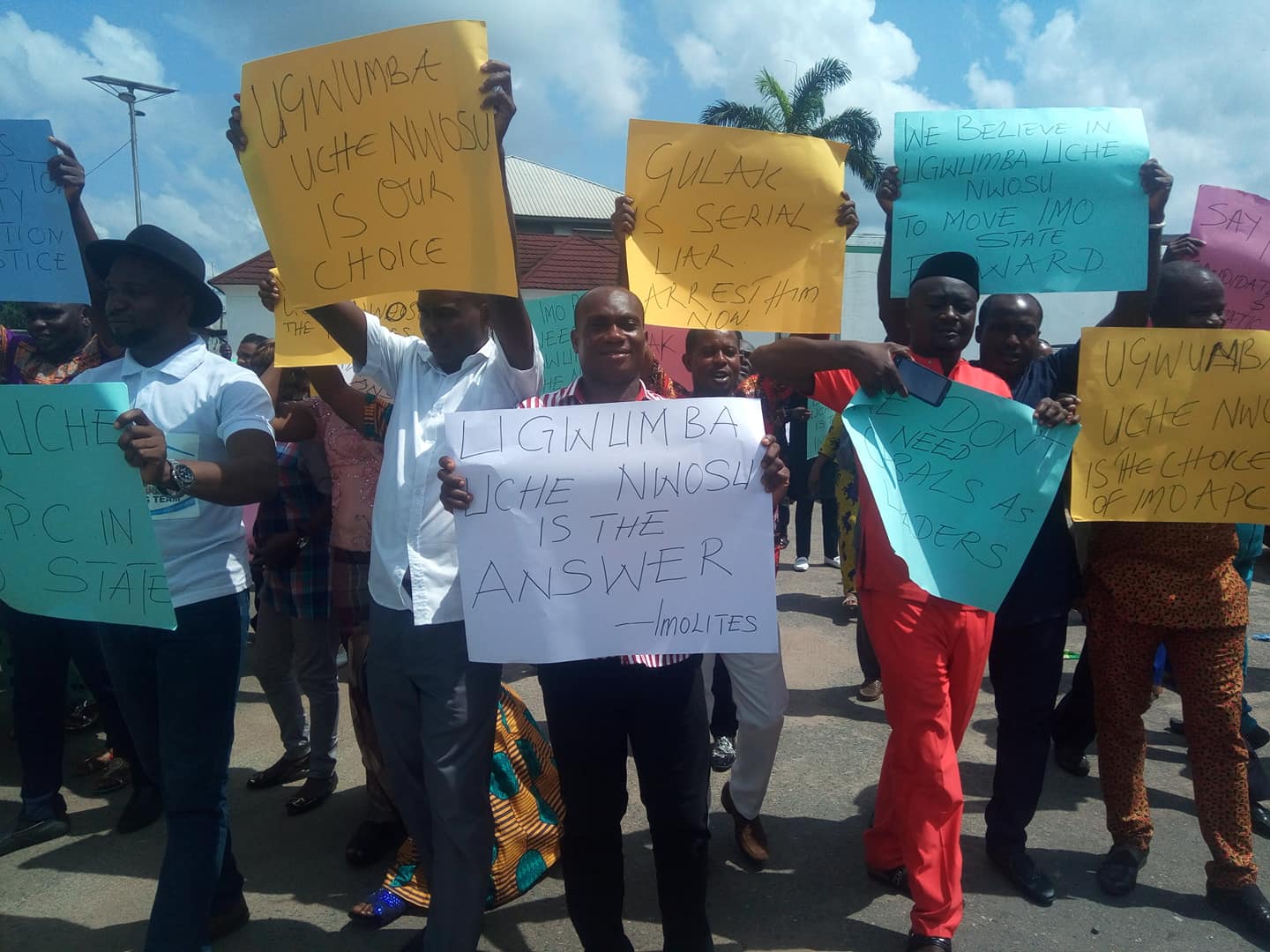 The rat race for the governorship ticket of the All Progressive Congress,APC in Imo State has continued with the camp of Governor Rochas Okorocha of Imo State increasing pressure on the National Working Committee, NWC to name  Uche Nwosu as the governorship candidate of the party.

This is as tension mounts in the party as party members and people of the State wait with bated breath whom the National Working Committee, NWC will announce as the party’s governorship candidate on November 2nd.

Governor Okorocha’s favorite for the ticket, Uche Nwosu is up against Senator Hope Uzodinma.

Senator Uzodinma has the backing of more than five governorship aspirants in the APC as the Senator’s loyalists continue to say that the Senator will be announced as the governorship candidate of the party.

Hundreds of protesters mainly Local Government Chairmen and Councillors stormed the streets of Owerri on Tuesday calling on the party to announce Uche Nwosu as the governorship candidate of the party.

The Councillors are drawn from the 305 wards in Imo State. They carried placards with various inscriptions.

One of the Councillors, Abakwam Chika who represents Umuokwara Akokwa in the Ideato legislative Council said “We have come out as the leaders who are closest to the grassroots to convey our unwavering support to the governorship candidate of our great Party, Ugwumba Uche Nwosu. We shall do everything to mobilize effectively for his victory during the general elections.”

This is the second protest in less than 14 days by loyalists in Okorocha’s camp who seem to have become apprehensive as deadline for the submission of names of candidates by political parties draws near.

We Are Not On Vendetta Mission- ISOPADEC Probe Panel Assures Workers

innonews - July 24, 2019 0
*PRESS RELEASE* The members of the probe panel constituted by the Governor of Imo State, His Excellency Rt. Hon....

innonews - July 6, 2017 0
Barrister Kingsley Onunuju, a chieftain of the All Progressive Congress, APC has been freed by his abductors. He spent four days in the kidnappers den. Onunuju...

Advocates Of Direct Primaries, Harmonization In Imo APC Loose Out

innonews - September 21, 2018 0
*BY RALPH EJIMKONYE* Those agitating for Direct Primaries in the All Progressive Congress, APC in Imo State may have lost the battle. Most of the governorship...