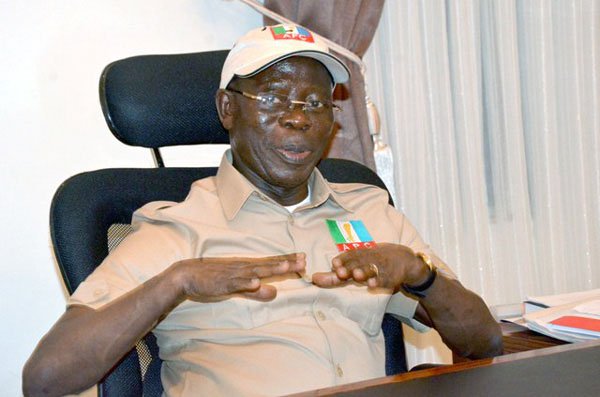 The rift between Imo State Governor, Rochas Okorocha and National Chairman of the All Progressive Congress, APC, Comrade Adams Oshiomhole, continued on Thursday with the Imo State Governor denying bribing the party Chairman.

Reacting to a report published on an online news medium, Sahara Reporters which claimed that Okorocha bribed Oshiomhole $500,000 to announce his son in law, Uche Nwosu as governorship candidate of the party in Imo State, the Imo State Governor said he had no reason to do so.

In a statement by his Chief Press Secretary, Sam Onwuemedo, Okorocha said he never no reason to bribe Oshiomhole because his son in law, Uche Nwosu won the governorship primary election of October 2, 2018 which was cancelled and that of October 6, 2018.

Part of the statement reads “A victorious candidate would not have bribed anybody. Only a failed aspirant like Hope Uzodinma would have bribed Oshiomhole.

“And we challenge anybody with any iota of proof in the contrary to make it public. Governor Okorocha is not the kind of person that spends money bribing people. The report is not true and should be disregarded” he said.