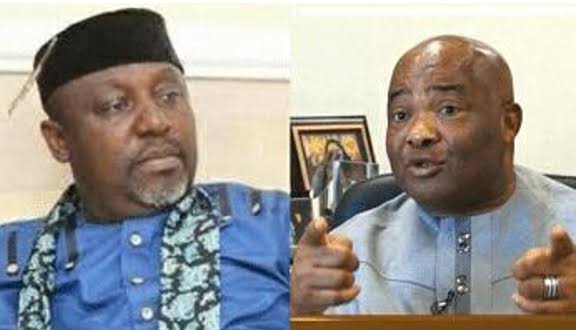 The crisis in the All Progressive Congress, APC, Imo State has taken a newer dimension following fresh fireworks between Imo State Governor, Rochas Okorocha and the APC governorship candidate in the State, Senator Hope Uzodinma.

The duo had become bitter rivals after the latter was named the governorship candidate of the party in Imo State.

Okorocha had preferred his son in law, Uche Nwosu who lost the party’s guber ticket.

However, the arrest of Senator Uzodinma by the Special Presidential Investigation Panel For Recovery of Public Property over alleged breach of contract to the tune of 12.5 million dollars, has opened exchange of salvos between Okorocha and Senator Uzodinma.

The Senator had in a statement yesterday that he was never arrested, alleging that Okorocha was behind the news that spread like wildfire on the social media.

In a statement by the Senator’s campaign organization Director of Media and Special Duties, Declan Emelumba, he said “it is very obvious that Okorocha and his people are behind this evil story.

“They have planned so much against the APC Governorship candidate, from the phony dud cheque issue to a non existent non assets declaration charge.

“Their latest plot is this Calabar dredging contract. However they should know that the company handling the Calabar dredging contract is Calabar Channels Management Company in which Nigerian Ports Authority (NPA) has 60 percent equity shares. So if there is anybody to be arrested for anything then it is the Managing Director of NPA and not a minority partner, Niger Global, in which Senator Uzodinma is a shareholder”

“Accordingly, there is clear evidence that this is a failed plot by the Governor and his men. The fact that simultaneously as they planted the Punch online story, their own so called state publicity secretary of APC Imo State, Onwuasonya FCC Jones, issued a press release celebrating the false arrest and even said in the statement that it was from their investigation that they found out about the “arrest” of the senator, shows clearly that they are behind the whole plot.

*Okorocha Fires Back*
Governor Okorocha in his reply to Senator Uzodinma said he wants to become Governor of Imo State in order to enjoy immunity to enable him escape trial from the criminal trials he is facing presently.

In a statement by his Chief Press Secretary, Sam Onwuemedo, Okorocha also accused the APC National Chairman, Adams Oshiomole of wanting the APC to loose Imo State by fielding Uzodinma.

“This is the man Oshiomhole wants to govern Imo people. If Oshiomhole had asked question and if he was to be keen in APC’s victory in Imo he would not have gone into any deal with Chief Uzodinma” he said

Okorocha added that he does not witch hunt.

“Chief Hope Uzodinma who is doing all he could to become governor of Imo State in 2019 and who the National Chairman of All Progressives Congress, APC, Comrade Adams Oshiomhole has thrown up as the governorship Candidate of the Party in Imo does not want to become governor to actually govern the State but to enjoy immunity to enable him escape from the criminal trials he is facing at the moment.

“Chief Uzodinma is facing trial over issuance of dud cheque and the trial Judge, Justice Abdulwahab Muhammed was reported to have referred the case to EFCC for investigation and for the necessary actions. He is also on trial over non-declaration of Assets and the case is before Justice Babatunde Quadiri of Federal High Court Abuja.

“He was also arrested last Sunday at the Nnamdi Azikwe International Airport in Abuja by the Special Presidential Investigation Panel for Recovery of Public Property over alleged breach of Contract to the tune of 12.5million dollars. This is the man Oshiomhole wants to govern Imo people. If Oshiomhole had asked question and if he was to be keen in APC’s victory in Imo he would not have gone into any deal with Chief Uzodinma.

And these are matters that had happened years before now and they have nothing to do with Rochas Okorocha and even when the governor has no record of witch-hunting in his Political life and in his life generally. He is too godly to think evil against anyone.
So, Chief Uzodinma is desperate to govern Imo State through the assistance of men like Adams Oshiomhole to evade the criminal trials he is already facing. His idea is that once he becomes governor he would be leveraging on the immunity provision to evade these trials.

“And under normal circumstance, Chief Uzodinma would have announced his withdrawal from the governorship race over these criminal trials but he does not know the damage these criminal trials have done to him, Imo and APC as a party especially in a situation where the APC government under President Muhammadu Buhari has carved out a niche for itself over the war against corruption.

“No doubt Imo APC would be doing itself a disservice if it allows Chief Uzodinma to be its flag bearer in the 2019 governorship election. Imo people do not treat such issues with kid gloove and that was why they declared war against 419 fraudsters in 1996.
Chief Uzodinma should be advised to withdraw from the governorship race and also quit politics to enable him face these trials and he can come back to politics if at the end of the trials he is not found guilty in any of them. The reason being that image or character is an important ingredient in the politics of any individual. He should take the bold step.

innonews - June 27, 2020 0
The cold war in the Imo State chapter of the All Progressive Congress, APC, came to the fore, weekend, when the Marcellinus...

innonews - January 15, 2019 0
The APC Presidential Council has released schedule of President Muhammadu Buhari’s visit to the 36 States of the Federation.

innonews - October 18, 2017 0
Leaders of the All Progressive Grand Alliance,APGA in Imo State have been engaged in serious consultations over the deluge of top politicians mainly governorship...