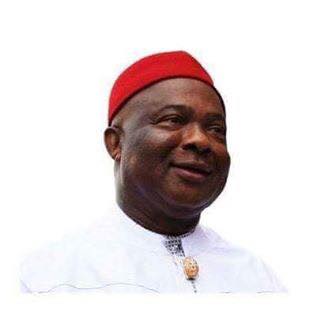 If reports reaching this newspaper is anything to go by, the governorship candidate of the All Progressive Congress, APC in Imo State, Senator Hope Uzodinma, may choose his running mate from Okigwe zone.

The race for the Senator’s Deputy has been ongoing since he emerged the party’s governorship candidate recently.

Imo State has three geo political zones, Okigwe, Owerri and Orlu Zones all scrambling to produce the next governor of Imo State in 2019.

Owerri zone has been in the forefront to produce the State Governor having last tasted the pie in 1992.

The choice of Okigwe zone as running mate could not be verified as at press time but reliable sources confirmed to this newspaper that “except there is last minute changes, it is almost certain that Okigwe zone will produce the Senator’s running mate”

Some governorship aspirants in the party from Owerri zone in the APC such as Imo State Deputy Governor, Eze Madumere, Chima Anozie, George Eche and Jude Ejiogu- who were former Secretaries to the Imo State Government under Okorocha have been widely tipped for the running mate slot to the Senator.

At the moment, Barr C.O.C Akaolisa is the official running mate to the Senator though there are feelers that his name may be substituted before the close of the substitution window provided INEC that will end in December.

Akaolisa hails from the same zone with the APC governorship candidate

innonews - September 14, 2017 0
Indications have emerged that Imo State Governor, Owelle Rochas Okorocha and some stakeholders in Owerri have struck a deal in aftermath of the demolition...