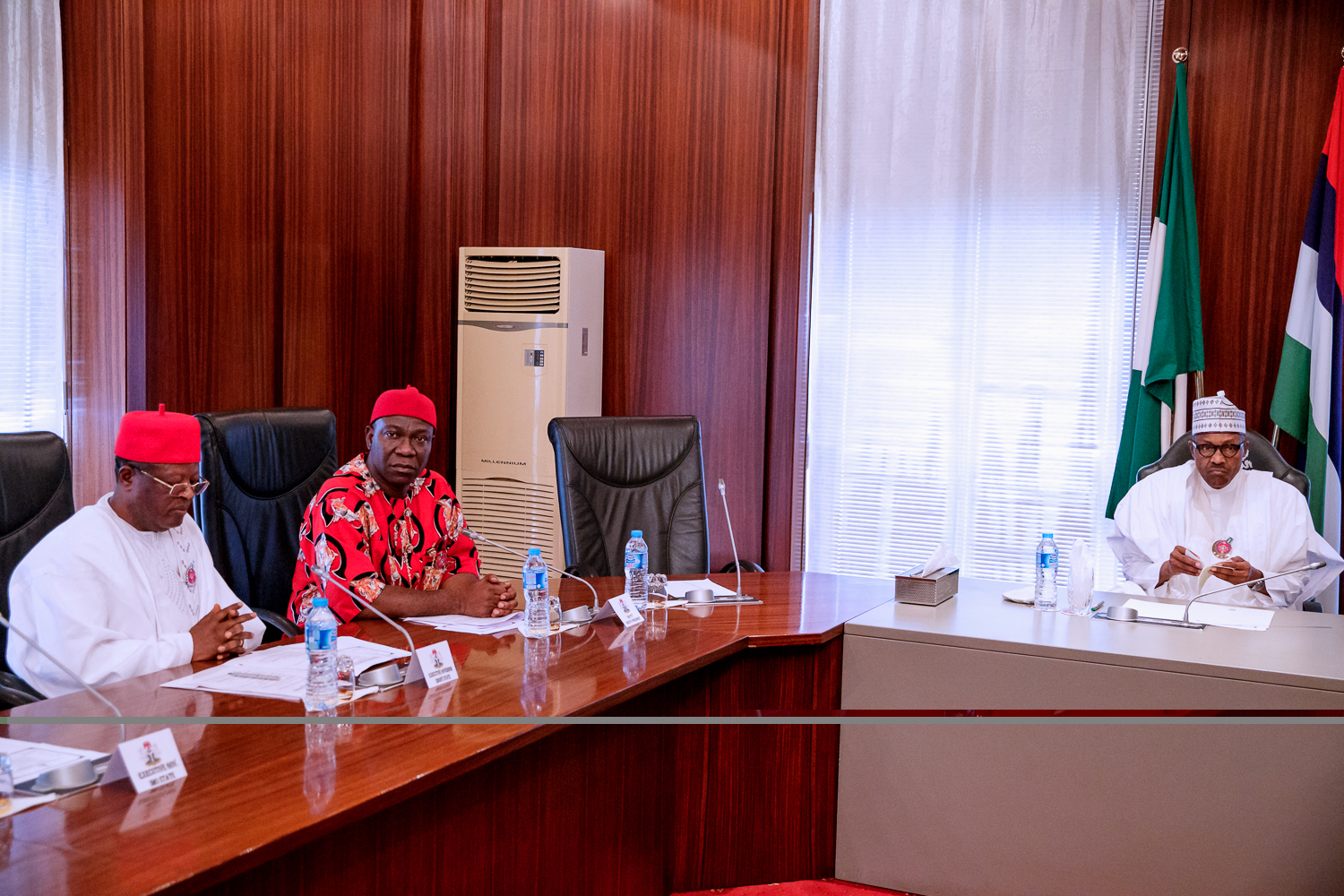 Imo State Governor, Rochas Okorocha was absent at the meeing. While other State Governors are of the Peoples Democratic Party, PDP, Okorocha is of the APC.

According to reports, the President assured that the seven month delay in passing the 2018 Budget is not an excuse that will affect all ongoing federal projects.

The Federal Government, according to him, would sustain the support to the South East in the area infrastructure.

‘‘I assure you that we are doing our best and will not default on the agreements signed on ongoing projects,’’ the President told the delegation, led by Deputy Senate President Ekweremadu.

He noted that the delay in the execution of capital projects was caused by delay hold up.

He said: ‘‘When you sign, and you don’t pay, they (contractors) can legally jerk up their costs. This is part of the problem.

‘‘The infrastructure budget is a deficit budget. The borrowing plan was only approved three weeks ago and all ministers and departments of government have been instructed to forge ahead. We must not find excuses for delaying the projects.

‘‘Developing infrastructure is the best thing we can do. When the roads are okay, the rails are established and there is power, Nigerians will flourish in their businesses.’’

On the undulating surface of the Akanu Ibiam International Airport, Enugu, the President assured that it would be addressed in the new budget.

He also spoke of government’s serious interest in the new Port-Harcourt-Maiduguri standard gauge railway which traverses several states, including those in the South East.
President Buhari was accompanied to the meeting by the Secretary to the Government, Boss Mustapha and some cabinet ministers, including that of Transportation, Rotimi Amaechi and Power, Works and Housing, Babatunde Fashola.

The president responded from point to point on all the issues raised by the governors, to their satisfaction.
The Minister of Transportation gave assurance that this project, the single most costly rail project at 12 billion dollars, would soon be coming to the Federal Executive Council (FEC).

The Ministers were directed to follow up with the private sector on key projects in the region, including the South East Dry Port and the Geometric Power Plant in Aba, to untangle the problems causing their delayed take-off.

Gov. Dave Umahi of Ebonyi said they came specifically to thank the President for the award of the contract for the major component of the second Niger Bridge at the cost of N206 billion.

‘‘The project is the dream of our people and it has become a dream come true. Our people said we must come and thank you. Your Excellency, Mr President we are grateful Sir,’’ he said.

While enumerating some challenges confronting the Governors to the President, Umahi said: ‘‘out of mutual respect, we have come to you as a caring leader to listen to us.’’

innonews - January 2, 2018 0
Son of Imo State Governor, Rochas Okorocha is in the United Kingdom over an ill health Reports said the news of Okorocha's trip abroad was...

innonews - July 17, 2020 0
Following media reports that a political marriage between former Governors of Imo State, Rochas Okorocha and Emeka Ihedioha, may be in the...

innonews - January 4, 2022 0
There is tension in Imo State as Governor Hope Uzodimma, is expected to mention those sponsoring insecurity in Imo State at a...