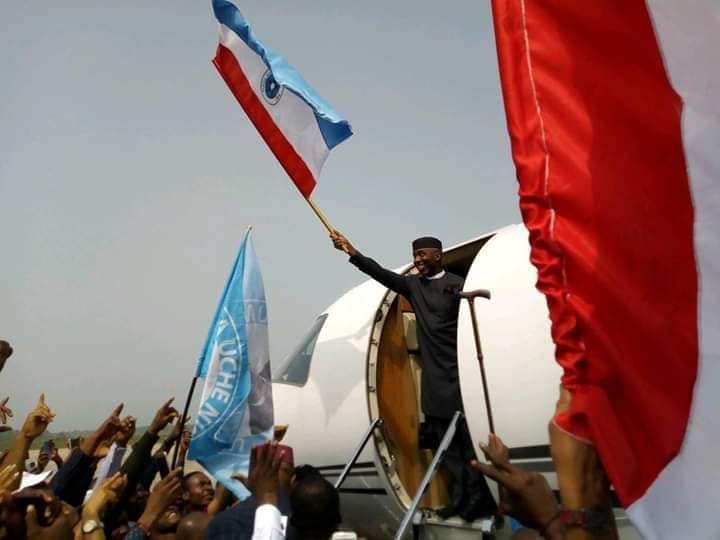 22 Members of the Imo State House of Assembly who lost return tickets in the All Progressive Congress, APC have joined former Chief of Staff to Governor Rochas Okorocha, Uche Nwosu to the Action Alliance, AA.

Nwosu on Tuesday arrived Owerri brandishing the flag of the Action Alliance, AA having emerged the party’s governorship candidate.He had lost the APC governorship ticket to Senator Hope Uzodinma.

Among principal officers of the House who defected to the AA with Nwosu include the Speaker, Acho Ihim who is Nwosu’s running mate and the Majority Leader, Hon. Lugard Osuji who is widely speculated will be the Speaker of the House under an AA led administration in Imo State.

Nwosu was reported to have said injustice, impunity and lack of respect for party’s constitution made him dump the APC but maintained that his new party will work ensure President Muhammadu Buhari is re- elected for a second term.

He said “We will deliver Governor Rochas Okorocha as Senator because Action Alliance has no senatorial candidate in Orlu zone.

“I have no problem with President Muhammadu Buhari. My headache is the National Chairman of APC.

“It is a divine project and we are ready for the election. It is an inter-party marriage between AA and APC in Imo State.

“We will work with APC to deliver President Muhammadu Buhari, Governor Rochas Okorocha, myself and all our candidates.”

“Now I am happy,my mind,my spirit and my heart are relaxed with AA. I am going to continue my support for President Buhari’s re-election and Rochas Okorocha,who is going to be the Orlu Zone Senator under APC in 2019,while I will run for governorship under AA. They stole my mandate in APC.

Also, this newspaper gathered that APC candidates in Governor Okorocha’s camp may be backed by the Action Alliance, AA in the State.

A source said “ It is line with an inter party marriage in Imo State.This is good for our democracy

Meanwhile, the APC publicity Secretary in Imo State, FCC Onwusoanya Jones has quit the party. He has been appointed Director of Media and Publicity, Uche Nwosu Campaign Council.

innonews - May 13, 2022 0
Labour, Employment and Productivity Minister, Chris Ngige, has said he withdrew from the presidential race after consulting widely with his family, constituents,...

innonews - August 11, 2020 0
Major political parties in Imo State, are now on their toes, as the race for Okigwe senate seat hots up after a...