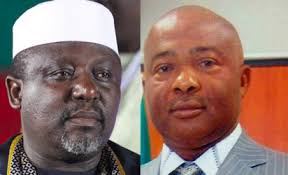 A looming cold war may be in the offing in Imo State Chapter of the All Progressive Congress, APC over President Muhammadu Buhari’s campaign

This newspaper was informed that Governors of the APC have been penciled down to lead the President’s  re-election for the 2019 general elections in their respective States.

The State Governors are to serve as State Campaign Coordinators (SCCs). President Buhari, according to reports will head the Council.

It was unclear what will be the role of APC governorship candidates as the National leadership of the party was silent on the matter.

Concern has been raised how the President’s re –election will be co- ordinated in Imo State where Governor Okorocha is enmeshed in a big rift with the party’s governorship candidate, Senator Hope Uzodinma

Okorocha had declared that the APC has no governorship candidate in Imo State, a statement which has further widened the depth of enmity between the duo.

Uzodinma was also reported to have vowed to plot Okorocha’s downfall in his bid to win the Orlu Senatorial ticket.

Both Okorocha and Uzodinma have however at separate fora vowed to work for the President’s re- election in the State.

A  source however said there is no basis for any rift or confusion over  who heads the President’s campaign in the States as the party leadership have  clearly spelt it out. But this may be far fetched in Imo State where there is a bitter war between the State Governor, Okorocha and the governorship candidate, Uzodinma.

At the moment,the battle for the soul of the party is raging as sources said Senator Uzodinma is bent on convincing the National Working Committee,NWC kick away the State party leadership made up of loyalists of  Okorocha.

Loyalists of Okorocha and his former Chief of Staff, Uche Nwosu occupy all party positions from the ward to the State levels.

The clamour became more intense when Okorocha’s choice as his successor Uche Nwosu and 17 members of the Imo State House of Assembly left the APC for the Action Alliance, AA.

innonews - February 19, 2018 0
The Vatican on Monday said it had to stand down Bishop Francis Okpaleke as Bishop of Ahiara Diocese. Okpaleke had been appointed as Bishop of...

innonews - December 29, 2019 0
BY: RALPH EJIMKONYE The Igbo National Council, INC, has called on the Arewa Consultative Forum, ACF, to call to...

innonews - May 10, 2017 0
The Imo State Police Command has said it rescued three persons kidnapped by a kidnap gang and held hostage at a hide out in...

2019 Decalogue For The Next Governor Of Imo State. PROF PROTUS...

innonews - September 3, 2018 0
In the words of Walter Lippmann, “The final test of a leader is that he leaves behind him in other men the conviction and...