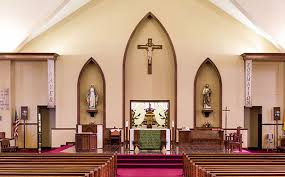 The Catholic Diocese of Enugu has opened up on recent political endorsements by the spiritual Director of Adoration Ministry, Enugu, South East Nigeria, Rev Ejike Mbaka.

Reports quoted the Director of Communications, Catholic Diocese of Enugu, Rev Fr. Benjamin Achi saying that the Church is apolitical and does not take any political position at any time.

“The church is apolitical.

“The church doesn’t take any political position at any time and the Catholic Bishops Conference of Nigeria (CBCN), a couple of weeks ago, issued an official statement to that effect; that the pulpit should not be used for any political campaign or the priest coming out to endorse any candidate as against the other. So, there has been official statement to that effect by CBCN.

‘So, anything on the contrary is against what the church is teaching.

“It is against the church’s principles,” he said.

Heavy Protest In Owerri Over Ihedioha’s Removal As Gov (PHOTOS)

innonews - January 19, 2020 0
Thousands of protesters all clad in black attire took over major streets and roads in Owerri, Imo State capital, to protest...

innonews - June 22, 2018 0
Super Eagles forward, Ahmed Musa came to the rescue of Nigeria at the World Cup in Russia as his two goals against Iceland shot...

innonews - August 21, 2018 0
Ahead of the August 25, 2018 local government election in Imo State, fire has rocked a Local Government Council headquarters. The fire took place at...