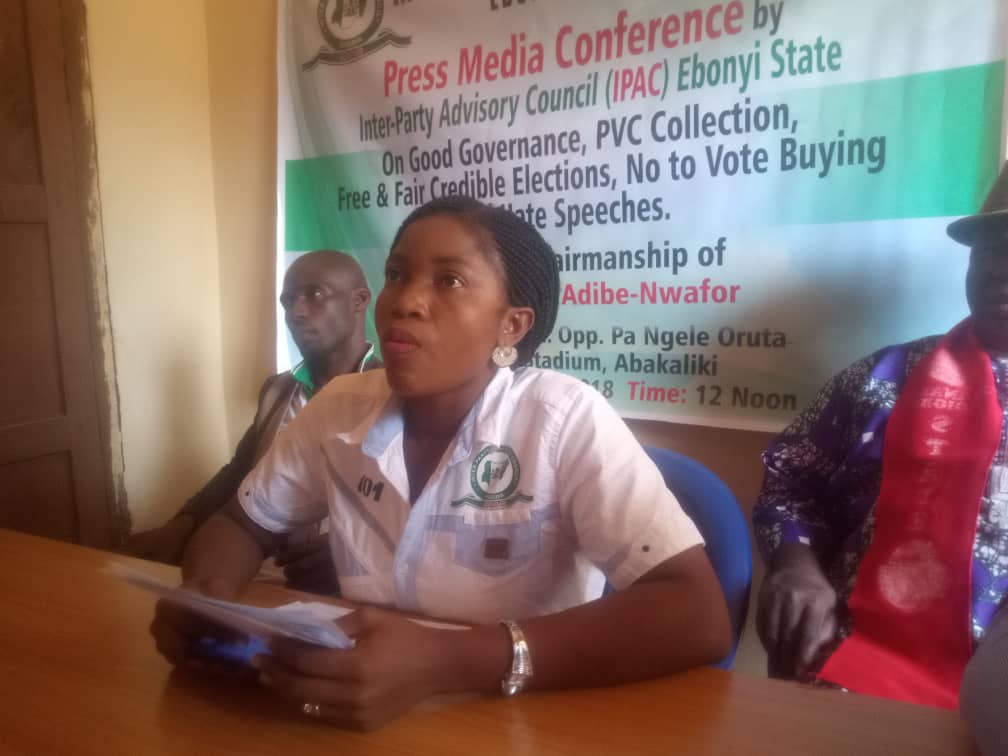 Inter-Party Advisory Council (IPAC), an umbrella body of registered political parties in Ebonyi State have  kicked against vote buying and election rigging, assuring that  it would soon organize a peace-accord forum for all gubernatorial, state and national assembly candidates in the  State ahead of 2019 elections

The State IPAC Chairman, Mrs Jennifer Adibe-Nwafor, who disclosed this in Abakaliki at a news conference warned that the group would not tolerate any form of rigging in next year’s general election in the state.

She noted that the peace accord forum would be in conjunction with some civil society   groups,Non-Government Organizations (NGO) among other relevant stakeholders in the state.

She said “The peace accord would focus on violence free elections and avoidance of hate speeches—before, during and after the elections in the state

Adibe Nwafor condemned incidences of hate speeches which pervade the state’s political landscape, noting that it causes political tension in the state.

“We also condemn vote buying and selling in any form and other acts capable of causing violence and disruption of the electoral process.

“The electorate is urged to shun vote buying and selling because it would entail mortgaging of its future through choosing of wrong leaders.

The Chairman called on the Independent National Electoral Commission (INEC), security agents and other relevant stakeholders to ensure there was free, fair and credible elections in the state during the polls.

She urged INEC to announce actual winners during the elections and avoid inconclusiveness which she noted was a way of rigging elections.

The Chairman urged the mass media to enhance its watchdog role in the society by joining the campaign of sensitizing the people to collect and judiciously use their Permanent Voter Cards (PVC).

“Mass media practitioners must also acquaint themselves with the modus- operandi or elections monitoring code and strictly adhere to its stipulations,” she said.

“We are collaborating with the Independent National Electoral Commission (INEC) to sensitize the people on relevant areas and ensure free and fair elections.

“We commend Chief David Umahi, Governor of the state for his infrastructural strides across the state and strides in the health,education among other sectors of the state.

The Sentimental Attachment Between Nigerian Singer, Flavour And Semah the Visual...

innonews - March 28, 2018 0
Semah was introduced to Flavour by Masterkraft and the traditional Queen Ruler, Julie Endee, in Liberia last year. His vocals, intonation, and confidence was something...

innonews - November 6, 2017 0
Chelsea has announced the stand down of their technical director, Micheal Emenalo, reports Chelsea website. Emenalo while announcing his decision said “: ‘This has been...