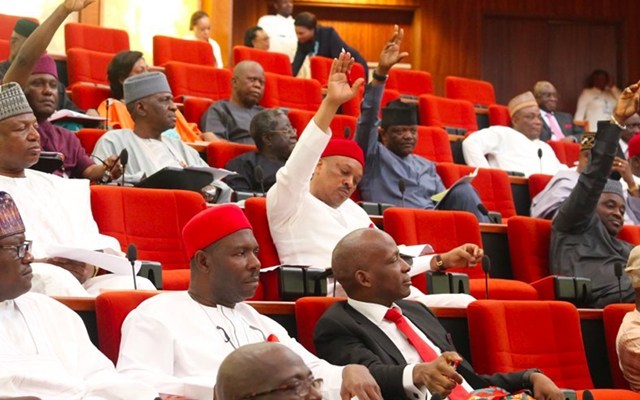 South East Senators are upbeat on the passage of the  South East Development Commission bill in the Senate on Wednesday.

Leader of the South East senate caucus,Senator Enyinnaya Abaribe, said in Abuja that the bill would mitigate the sufferings occasioned by the civil war between 1967 to 1970.

Abaribe flanked by other Senators expressed appreciation for the understanding of other senators when the bill was presented by Senator Stella Oduah representing Anambra North and Senator Samuel Anyanwu representing Imo East.

“We appreciate the 8th Senate for passing the South East Development Commission bill into law and as noted by one of our colleagues, the Commission would mitigate the sufferings occasioned by the civil war between 1967 to 1970,” the caucus said.

The group expressed optimism that the lower chamber would do the concurrence, while urging President Muhammadu Buhari to sign the bill.

“We urge the President of the Federal Republic of Nigeria, Muhammadu Buhari to sign the bill into law

“We are optimistic that the House of Representatives would do the concurrence of the bill.”

Co-sponsor of the bill, Senator Oduah was not available as at the time of this report to further speak on the Bill.

innonews - December 22, 2017 0
Despite complains of cash crunch in the State, most banks in Owerri have been besieged by residents who scramble to get their money for...

Big Win For “Allied Forces”, As Hilary Eke Is Sworn In...

innonews - June 4, 2018 0
BY UGONNA OKO The Allied Forces, a powerful of group of politicians in Imo State chapter of the All Progressive Congress, APC have scored another...

innonews - June 22, 2017 0
Ohaneze Youth foundation has said it has embarked on consultations with some key leaders in the North as it is set to meet with...

Imo 2019: Choice Of Running Mate Hots Up In APGA

innonews - October 29, 2018 0
There are strong indications that a running mate to APGA governorship candidate, Senator Ifeanyi Araraume may emerge this week, reliable sources revealed to this...