Uzorma, a fiery critic reputed for his unrelenting criticisms of the APC government in Imo State, has pitched his tenth with the Peoples Democratic Party, PDP.

He said he will work for the growth of the PDP to win the 2019 governorship election in Imo State, a saying a victory for the party  is a victory to ameliorate the sufferings in the State.

Ejiogu said Protus took a wise decision by joining the PDP, saying the party has no division. He urged members to embrace one another for the party to march to victory in 2019.

The ceremony which coincided with the birthday of Protus second daughter, Deborah was witnessed by the PDP governorship candidate, Hon.Emeka Ihedioha who was represented by Director General of his organization, Vin Udokwu.

Ihedioha commended Protus for taking a wise decision. Also, Isu LGA PDP Chairman, Anayo Udochukwu and House of Assembly candidate, said it is an honour to have Prof Protus in their midst. 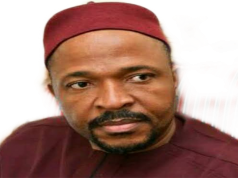