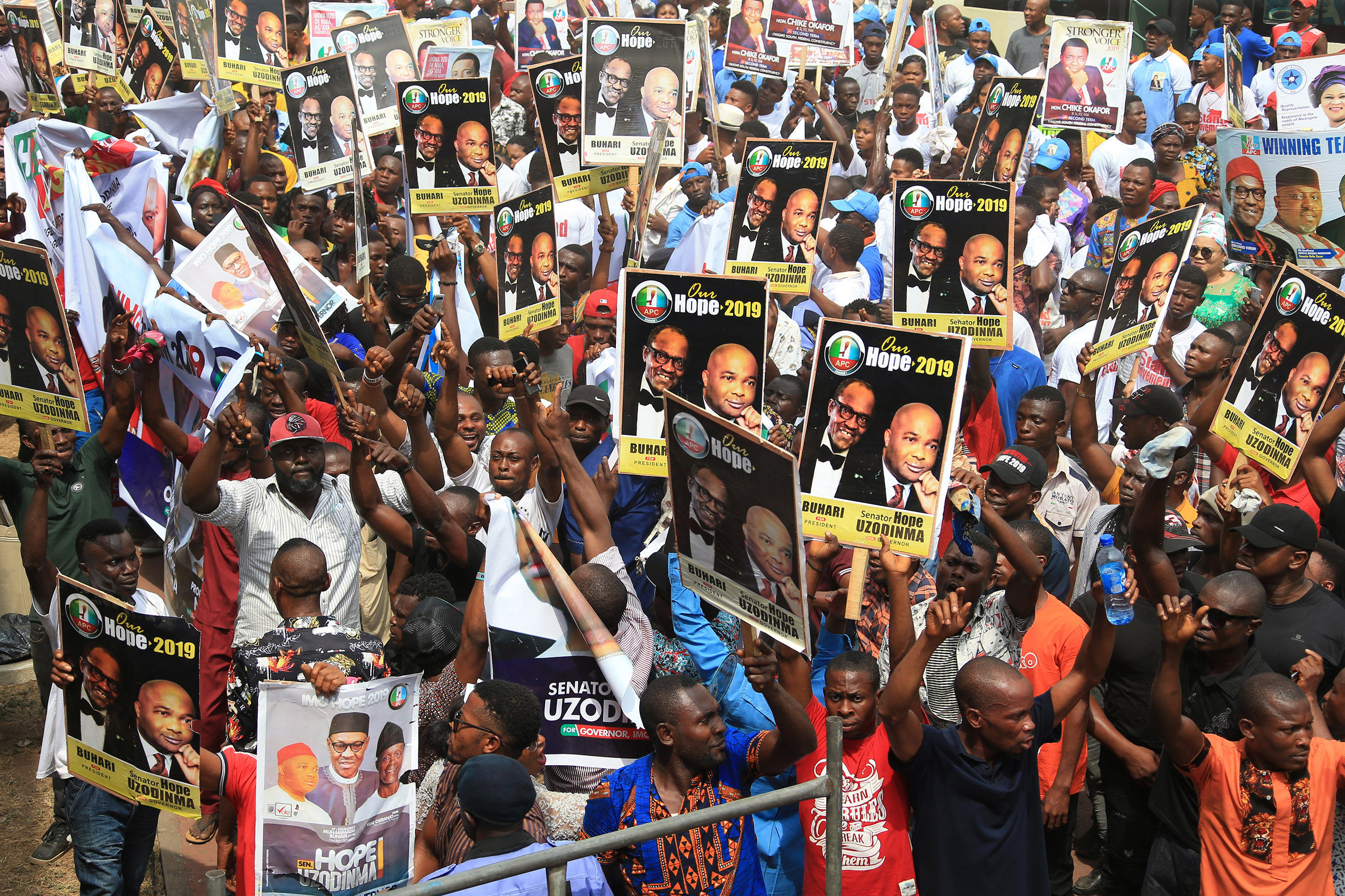 It was drama at South East women and youth rally in Owerri, Imo State capital organized for the re- election of President Muhammadu Buhari. Supporters of Action Alliance, AA, candidate, Uche Nwosu and All Progressive Congress, APC candidate, Senator Hope Uzodinma clashed at the event.

The scuffle did not however stop the rally as wife of the President, Aisha Buhari represented by the wife of Vice President, Dolapo Osibanjo advised women and youths not to leave the polling booths after voting on the Election Day .

What transpired at the rally gave an inkling of the depth of the feud between Governor Rochas Okorocha who is backing his son in law in he Action Alliance, AA, Uche Nwosu and the APC governorship candidate, Senator Hope Uzodinma.

“APC is taking us to the next level.  The government of President Buhari is working for men, women, youths and children. The government cares for all. Everybody should vote for APC. Nobody should be at home on the day of elections, but should go and vote” She said.

Governor Rochas Okorocha used the event to speak on the re- election of President Muhammadu Buhari and the governorship ambition of his son in law and AA governorship candidate, Uche Nwosu

He said “In Imo State and by extension South-East we need Buhari more than any other zone in Nigeria because we know what Buhari victory in 2019 will be for Ndi Igbo. It is for this reason that we therefore urge all of you, the Campaigners of Buhari not to waste your time in Imo State. Imo Victory for Buhari has been signed, sealed and delivered”.

On Uche Nwosu he said “Let me inform all of you that Ugwumba Uche Nwosu is APC in Spirit and AA in dressing. He is still one of you and only using the platform to correct an injustice done to Imo people”.

APC governorship candidate, Senator Hope Uzodinma did not speak at the event.

innonews - October 14, 2017 2
There have been mixed reactions on the visit of President Jacob Zuma of South Africa to Imo State. Zuma is on a two day visit...

innonews - August 16, 2017 0
Factional National Chairman of the All Progressive Grand Alliance, APGA, Chief Martin Agbaso has described the emergence of Chief Willie Obiano as the candidate...

innonews - April 23, 2019 0
The proposed Federal Polytechnic, Aba, Abia State is underway with a bill for an Act to provide for its establishment passing second...

innonews - August 18, 2017 0
The Indigeneous People of Biafra (IPOB) has said it has withdrawn the threat to stop the conduct the November 18 governorship election in Anambra...