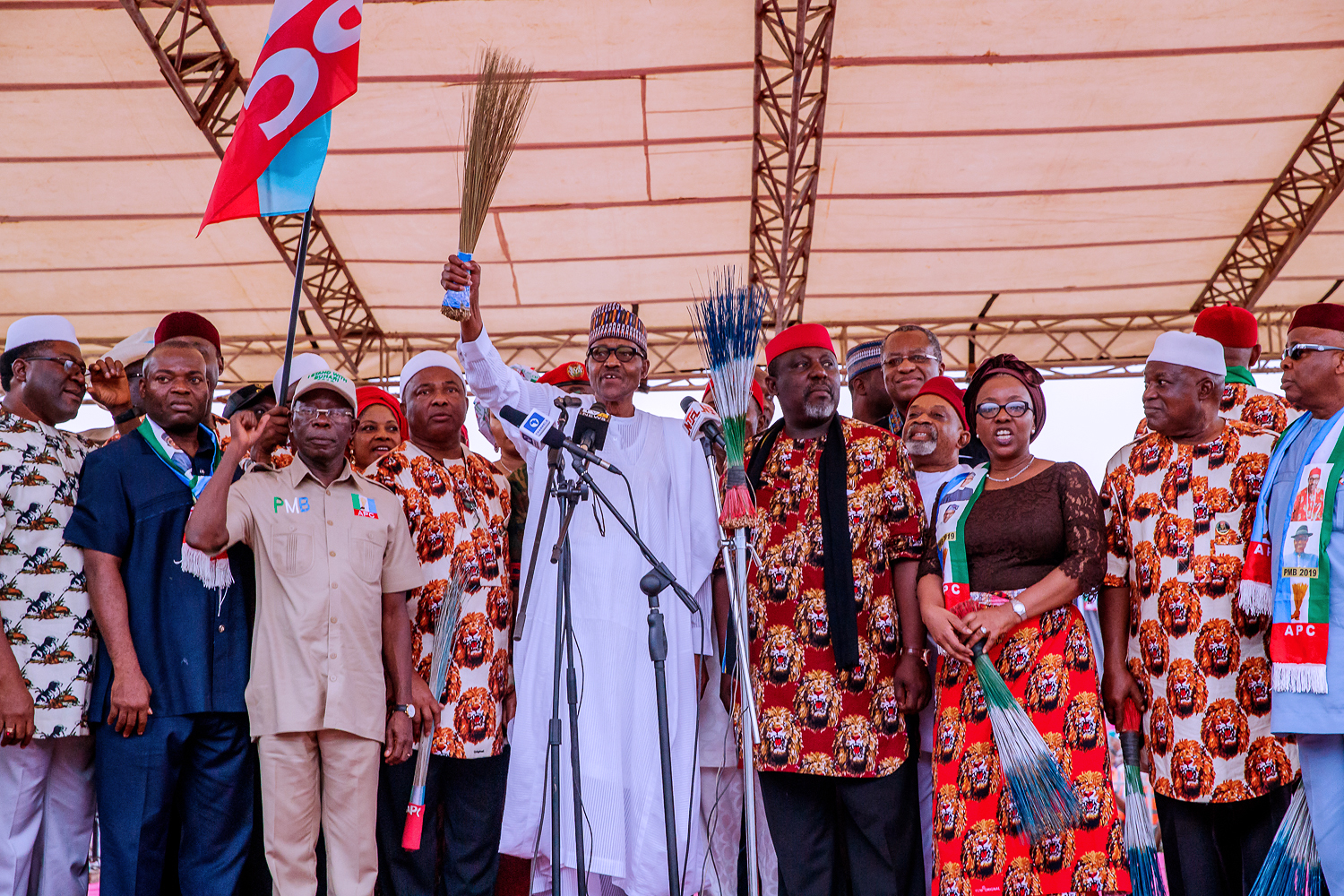 *Buhari Tells Imolites To Vote Candidates Of Their Choice*

*APC Not In Alliance With Any Political Party- Oshiomole

It was a mild drama at the Dan Anyiam stadium, venue of All Progressive Congress, APC in Owerri when President Muhamamdu Buhari advised the people of the State to vote for candidates of their choice across party lines.

The President also spoke on his administration’s performance in the area of economy, security and the fight against corruption.

Buhari said “I want you to please maintain your balance and success. Don’t allow Intra or Inter Party problems to remove your sense of responsibility. Your vote is your vote. Choose whoever you like across party, ethnicity and religion”

Imo State Governor, Rochas Okorocha said it is wrong for anyone to allude that President Muhammadu Buhari hates Igbos recalling how Buhari in his previous attempts to be President selected Igbos such as Late Chuba Okadigbo and Late Edwin Ume Ezeoke as his running mates.

Okorocha commended Buhari for showing courage in the fight against corruption in the country, assuring the President of victory in the 2019 presidential election.

“Mr. President, your victory in the coming elections is signed, sealed and delivered in Imo State” he said

National Chairman of the All Progressive Congress, APC, Comrade Adams Oshiomole said the APC is not in alliance with any political party in the State. He said the party has the capacity to deliver its candidates in Imo

He reaffirmed Senator Hope Uzodinma as the party’s governorship candidate assuring that hope will be restored in the State when Uzodinma emerges Governor.

In his remarks, Senator Hope Uzodinma explained that after the party primaries in the State, he had faced internal hostilities. He disassociated the APC in the State from the endorsement of PDP presidential candidate, Atiku Abubakar by Ohaneze Ndi Igbo.

He also explained that the APC in Imo has recorded success in recent times with the defection of a good majority of PDP members in the State who joined the APC under the guise of N-PDP.

innonews - October 27, 2017 0
BY JEROME UNANKA# There is high rate of complains of economic hardship in Owerri, Imo State a factor that has been traced to the demolition...