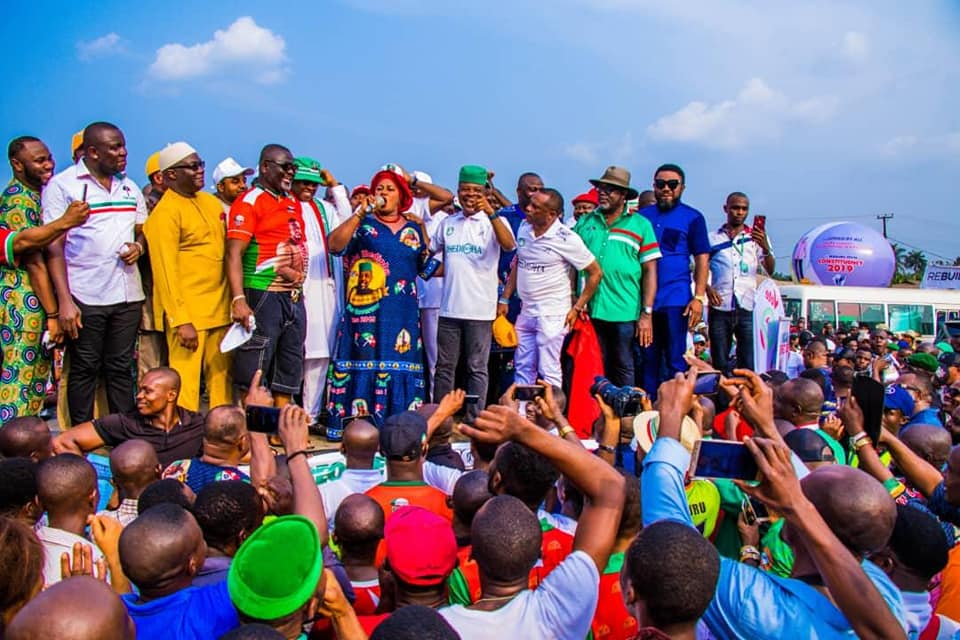 
In Igbo worldview, it is commonly believed that a man who doesn’t know where the rain started to beat him may also unlikely not know where it stopped beating him. Perhaps, to further give vent to the imperative nature of this assertion, John Munonye, the erudite prose author, in his novel, “The Oil Man of Obange “,re-echoed this Igbo belief thus : “lets trace back and see where the rain started to beat us “.

Since the governorship primary of the Peoples Democratic Party, PDP, Imo State, where as was expected, the former Deputy Speaker of House of Representatives, Rt Hon Emeka Ihedioha emerged tops while Distinguished Senator Samuel Samdaddy Anyanwu came second, some harbingers of trouble and disunity, have attempted albeit unsuccessfully, to cause unnecessary conflagration with the party. This notorious group led by a renowned mercantile political mercenary had hoodwinked some innocent minded but gullible fellows into believing that unless Ihedioha is pulled down, the party won’t make any head way.

But they forgot that anything bad lasts but for a while. Gladly, it has now dawned on the party that it will be disastrous to allow PDP in Imo go into extinction because of the inordinate desires of a few men.

Consequently, the party leadership in its wisdom chose to stem this ugly by reconciling the two gladiators -Ihedioha and Samdaddy. This was an obvious effort “to search for the black he-goat while there is still day light before it gets dark. “

The January 10,2019,inauguration of the 188 Campaign Council and its 24 sub -committees provided the much sought for forum to announce to the world that at last, peace has returned to the party and that Ihedioha and his brother, Samdaddy are now on the same page. This development technically ended the fleecing of the two leaders by some of their lieutenants in the guise of always asking for logistics for this and that.

I really do not intend to murk rake the thorny issues of the past here to avoid igniting another fire but suffice it to state that peace and unity have made serious in -road in Imo PDP no matter how anybody may choose to appraise the reported reconciliation.

With the development, other political parties, from available reports, are now shivering because the PDP as a compact unit moving into a political battle next month could be likened to an impending “Hurricane Katrina “.It is indisputable that PDP has the most formidable political structure in the 305 electoral wards in Imo. And this is causing pneumonia to political opponents of the PDP.

While I thank Distinguished senator Samdaddy for accepting the olive branch and coming on board as a leader that he is, immense gratitude must also be extended to the political oracle and clearing house of PDP, Chief Emmanuel Iwuanyanwu (Ahaejiagamba), for putting his huge feet down and saying “enough is enough “.Iwuanyanwu ‘s intervention truly calmed frayed nerves.

The indefatigable chairman of PDP in Imo, Chief (Barr) Charles Ezekwem, deserves a big path on the back for exhibiting sterling leadership qualities when it mattered most. It only takes a man of stupendous courage and broad mindedness to annihilate personal ego and quality relationship with a close friend, to do the right thing at the right time. Some people might not understand the import of my assertion here but “if you know, you know “.
Incontestably, the governorship primary brouhaha in Imo PDP was an acid test for Ezekwem’s leadership credentials and capability. To the glory of God, he proved some doubting Thomases wrong as he swam out of the murky waters safely and admirably. Ezekwem understood that it will be catastrophic to his integrity if the PDP’s house collapses on him. He was aware that the brewing disquiet in his party was a banana peel and booby trap for which his leadership profile will assessed in future. He therefore, applied King Solomon’s wisdom and scaled through the crisis to the admiration of even his traducers. However, whether these traducers were self-created or otherwise is a story for another day.

The inauguration of the PDP campaign council and its 24 sub-committees has indeed proven to be the elixir the party needed to calm the induced turbulence within the party. It provided a great opportunity for party leaders, elders, stakeholders and members to congregate, resolve any differences as well as cross -pollinate ideas on how to take over Douglas House, Owerri (the seat of power) from the “Alhaji ” presently occupying it with his hordes of “amalgiris “.

For instance, the flag off campaign rally of the PDP at Mbaitoli local government area last Monday lays credence to the emerging benefits from the reconciliation effort. It also underscored the importance of setting up the enlarged campaign council.

Party members, supporters and enthusiastic Imolites thronged the venue of the event at St Mary’s Catholic Church, Ubomiri.The rally was preceded by a town hall meeting at Orodo.

The innumerable crowd sang and cheered ceaselessly. The atmosphere was so electrified that it required no sooth Sayer or Ifa priest, to tell ALHAJI that Imo people hunger for the PDP to sweep him off by March 2,2019 together with Pa Bubu in Abuja. Clearly, Imo PDP without equivocation can be said to be back on track, quod erat demonstrandum(QED)

Back to the inauguration, the assurances which emanated from PDP leaders and elders were heartwarming and reassuring. It showed that they have realized where the rain started to beat them and therefore, wants to put an end to it for “once beaten twice shy “.

Addressing the mammoth audience at the party secretariat, Okigwe road, venue of the inauguration, Ezekwem (Ikemba Okigwe), made it clear that the in-house wahala in PDP is over. He attested that he was involved in the reconciliation meeting brokered by Ahaejiagamba. He averred that every party member must put personal interest aside and work for the success of the PDP.

The party chairman, who spoke amidst resounding applause from enthusiastic party members,reiterated that PDP ‘s interest is paramount, noting that Rt Hon Ihedioha ‘s candidature is well deserved considering his immense contributions to the party and the concerted efforts he put into his campaign prior to primary. In his words “it is time for us to unite as one family. The primaries are over. Rt Hon Ihedioha is our candidate after our transparent primary. If you don’t like Ihedioha, please like PDP. And if you don’t like PDP, like Ihedioha. But if don’t like both, it means you are a devil and enemy of the party “.

Not yet done, Ezekwem insisted that “Ihedioha is our best material for Imo governorship this year. He made the party strong and gave it a new lease of life. We are convinced that with him our victory is assured “.He further paid glowing tributes to both Samdaddy and Ihedioha for rekindling the spirit of brotherhood between them, pointing out that “all those who think that the party is heading for the precipice have been shamed “.He stated that posterity would always tell good stories about Chief Iwuanyanwu for his fatherly role in PDP, describing him as a strong pillar anybody can lean on.

While inaugurating the Campaign Council, Iwuanyanwu re-emphasized that a house divided against itself cannot stand. He said that the quest to sack the present occupants of Douglas House cannot be compromised for any reason whatsoever. He Ihedioha will be the next occupant of Douglas House by God’s grace.

“I really do not intend to murk rake the thorny issues of the past here to avoid igniting another fire but suffice it to state that peace and unity have made serious in -road in Imo PDP no matter how anybody may choose to appraise the reported reconciliation”.

APGA To Field Presidential Candidate In 2019

innonews - December 13, 2017 0
The All Progressive Grand Alliance has said it will field a Presidential candidate in the 2015 presidential election. This was disclosed by the Publicity Secretary...

innonews - July 16, 2019 0
The Governorship Candidate of the All Progressive Grand Alliance, APGA in the 2015 and 2019 governorship election in Abia State, Dr.Alex Otti,...