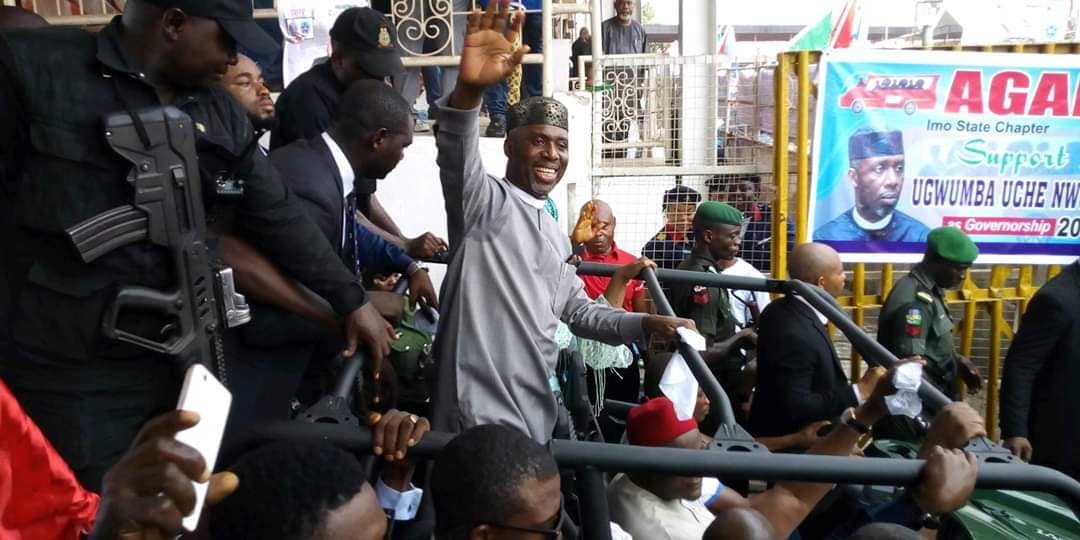 Owerri, Imo State capital literally came to a halt on Friday when thousands of supporters and members of Action Alliance, AA flagged off its governorship campaign in the State.

The party’s governorship candidate, Uche Nwosu, who spoke to a mammoth crowd at the rally held at the Dan Anyiam Stadium vowed to consolidate on the achievements and performance of Governor Rochas Okorocha when elected into office.

He said as Governor he will carry out programmes in various sectors of the Imo economy with priority on the health and education sectors. He assured that he will consolidate on the free education programme of the Okorocha administration by ensuring that schools in the State become completely ICT compliant.

Nwosu who was flanked by his wife, Speaker, Imo State House of Assembly and Deputy Governorship candidate of the Action Alliance, Acho Ihim, AA candidates for Senatorial, House of Representatives and House of Assembly, said his intention to serve the State is driven by his passion to give the State good governance.

The Action Alliance, AA governorship candidate said there will be free Medicare for those within the age bracket of 0- 7 years and 75 years and above in the State.He promised to restore the 27 general hospitals in the State and vowed to consolidate on the urban renewal programme of the present government.

Nwosu spoke on his reasons for leaving the All Progressive Congress, APC accusing the national leadership of the party led by Comrade Adams Oshiomole of meting out injustice to him.

He said this necessitated his move to the Action Alliance, pledging his support to President Muhammadu Buhari.

“We have no problem with President Buhari. Our problem is with the national leadership of the party which meted out on us injustice. We are in support of Buhari and we will deliver him in the State.

He expressed hope that the Action Alliance, AA will ensure President Buhari’s victory in the presidential election on February 16, 2019..

Nwosu called on Imo Youths to support his aspiration recalling how he underwent the hardship and pain of life as a youth. He called on his co contestants whom he described as “his fathers” to give youths the chance to be at the forefront of the leadership of the State.

In his remarks, National Chairman of the AA, Kenneth Udeze said the AA is the party to beat in the forthcoming governorship election calling on the people of the State to vote for Uche Nwosu and other candidates of the party.

innonews - March 22, 2018 0
A governorship aspirant on the platform of the All Progressive Congress, APC, Sir Jude Ejiogu has raised the tempo of his governorship ambition by...

innonews - April 21, 2019 0
BY DAN OPARA Hopes have been expressed by some Owerri indigenes that the ancestral Eke Ukwu Owerri market...

innonews - December 27, 2017 0
Some workers in the State are lamenting over non payment of November salary by the Imo State government. Details later..