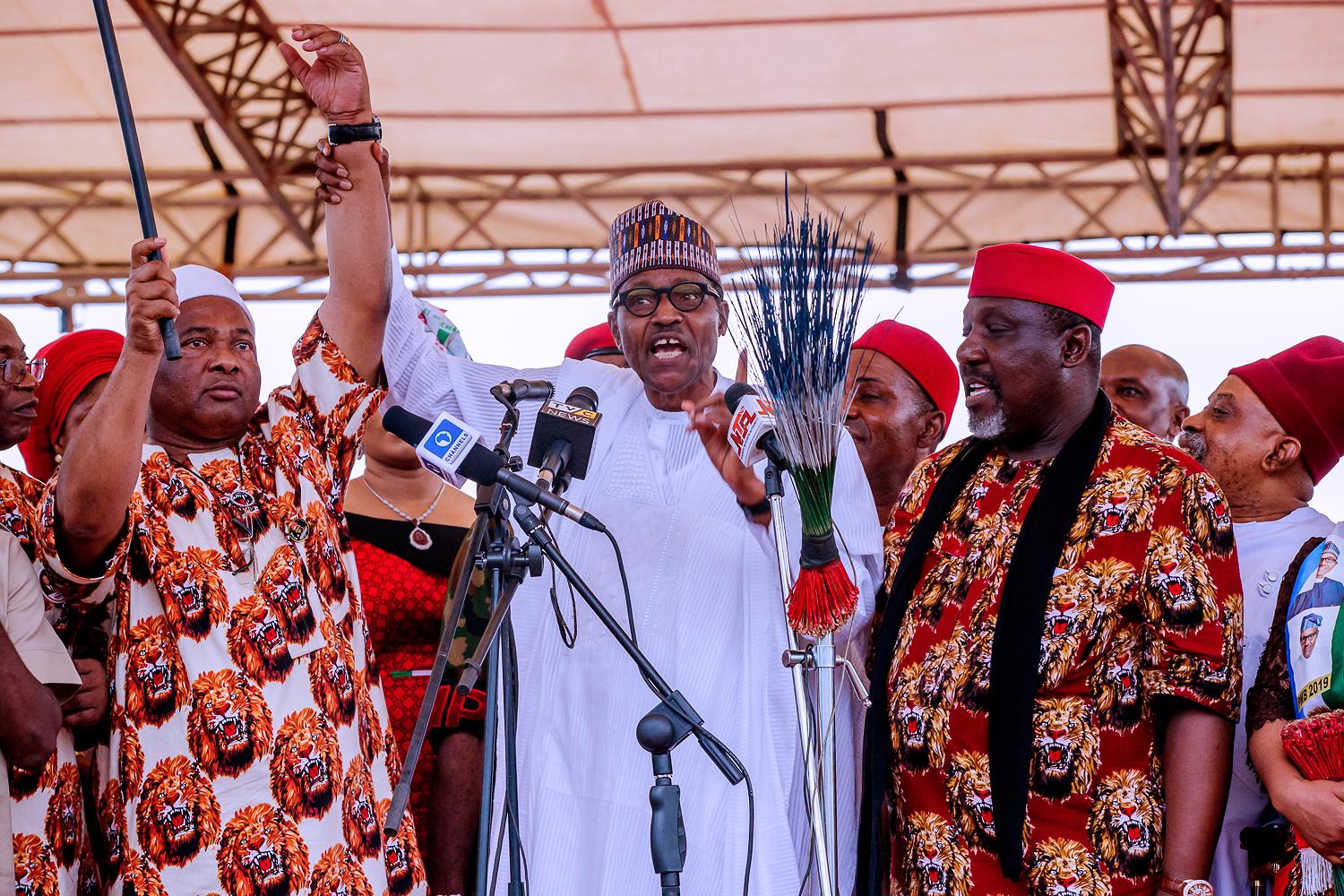 President Muhammadu Buhari was expected to win Imo State in the Presidential elections.

Aside the APC, more than two political parties had also pledged to work for the President’s re-election . They are Action Alliance, AA and United Progressive Party, UPP. Both parties have governorship candidates. The AA had gained so much strength in the State after Okorocha’s son in law; Uche Nwosu joined the party and emerged its governorship candidate after losing the APC governorship ticket to Senator Hope Uzodinma.

Governor Rochas Okorocha had repeatedly assured that the APC will deliver Buhari in Imo State. Uche Nwosu had promised one million votes for the President.The APC governorship candidate, Senator Hope Uzodinma had also vowed to deliver the President.

All that assurances never translated to reality as the Peoples Democratic Party, PDP presidential candidate, Atiku Abubakar coasted home to victory to win the presidential poll strengtehing the party’s chances in the governorship election to hold on March 9

Atiku scored 334, 923 votes to defeat Buhari who got 140, 630 votes after the PDP had secured Owerri zone senatorial seat and some House of Reps seats during the Presidential and National Assembly elections held on Saturday.

However, political analysts contend that the inability of the President to win the Presidential vote in Imo has to do with the division in the APC in the State with Governor Okorocha leading a faction of the party with most of his political followers entrapped in the Action Alliance, AA, a political party his son in law, Uche Nwosu is the candidate.

Senator Uzodinma who is the governorship candidate of the APC also leads another faction of the party.

The uncoordinated and divided co- ordination to the President’s re- election campaign by those who should deliver the President could be attributed to his loss in Imo State.

But aside these political skirmishes, the South East States have always aligned with the PDP and just repeated same in the 2019 polls.

Mr. Chuks Ahamefula, a political analyst said “The President’s loss in Imo State was expected. All those supporting him and co- coordinating his re- election in the State were not on the same page and it was difficult to have a united platform to work for his victory

“ Aside this, the PDP has strong taproots in the South East. It is not different in Imo State.

This leaves a huge burden on the APC in the State as it faces a huge task against the Peoples Democratic Party, PDP which seems to have gained considerable firepower ahead of the governorship election.

Outcome Of Anambra Election Will Not Occur In Imo State, Says...

innonews - November 30, 2017 0
BY CYRIL ARIRIGUZO# A commissioner-designate in Imo State and staunch member of the All Progressive Congress, APC Rescue Mission, Hon Lasbery Okafor-Anyanwu has said the...