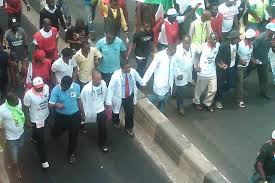 Practicing Medical Doctors in Imo State have embarked on an indefinite strike.

Kyrian Duruewuru, the Imo State Chairman of Nigeria Medical Association, NMA, who announced the strike of the doctors accused the State government of treating doctors unfairly.

According to him, the first phase of the strike would involve all doctors at Imo State Special Hospital, Umuguma, Imo State University Teaching Hospital, Orlu and Hospital Management Board

He lamented that their colleagues in other States enjoy the adjusted salary structure for medical practitioners while the State government has refused to implement it in the State.

He said soon, doctors in private hospitals and those in federal health centres in the State would down tools.

He said , “For the past four years , doctors in Imo State have received 70 percent of their salaries .

“Also , the doctors are being owed three -month salary arrears by the Imo State Government .

“For us , this is highly unacceptable and very insensitive. ”

Not Too Young To Run: Buhari’s Full Speech At Signing Of...

innonews - May 31, 2018 2
President Muhammadu Buhari has signed into law the Not Too Young Bill . The Bill was initiated by Imo State born Hon Tony Nwulu who...

innonews - March 6, 2020 0
As members of the Peoples Democratic Party, PDP lick their wounds over it's loss of Imo governorship seat, a former factional chairman...

innonews - June 11, 2017 0
A Former Corps Marshall of the Federal Road Safety Commission, FRSC and a staunch member of the Peoples Democratic Party, PDP, Osita Chidoka has dumped the...

Catholic Archbishop Opens Up On Candidates Imo Voters Should Vote For

innonews - March 4, 2019 0
The Archbishop of the Catholic Diocese of Owerri, His Grace, Most Rev AJV Obinna has called on the people of Imo State to...