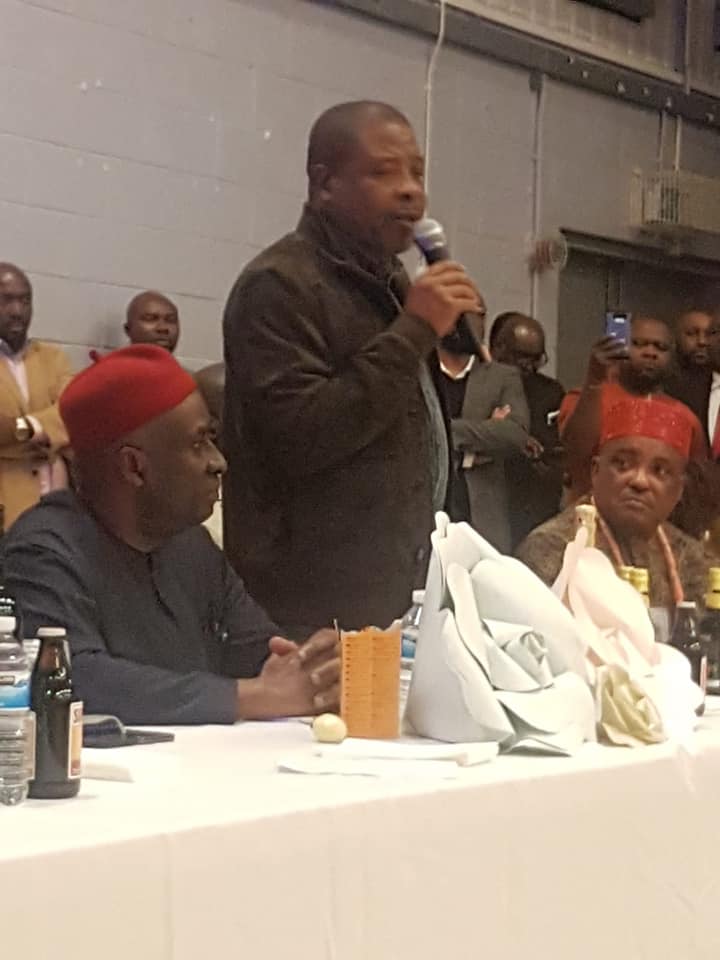 
Imo State Governor Elect, Hon.Emeka Ihedioha was in London, UK at the weekend where he promised to alleviate suffering of the people of the State.

According to reports, the Governor Elect who spoke to members of Imo State Union UK promised an inclusive government, urging Imolites in Diaspora to take active participation in the leadership of their State and play roles in determining who governs them.

While expressing appreciation for Ndi Imo in the Diaspora for their support, he promised to respect the Trinity of governance, the Executive, legislature and the judiciary, while assuring that the State Assembly members will be charged to their job which bother on legislation, oversight and appropriation.

He assured Imolites in Diaspora that his administration will stick to Rule of Law and Due Process.

He was presented with an award by Imo State Union UK in recognition of his giant legislative excellence when he served as in the National Assembly and left as Deputy Speaker of the House of Representatives and later Speaker for 12 years.

innonews - May 21, 2020 0
The Daniel Nwafor led faction of the All Progressive Congress, APC in Imo State, is on the verge of collapse as members...

innonews - March 1, 2021 0
Leader of the Movement For the Sovereign State Of Biafra, MASSOB, Ralph Uwazuruike, has advised South East Governors to take over Eastern...

Okorocha: Why Mbaise Nation Have Not Produced Imo Governor

innonews - January 7, 2018 0
Imo State Governor, Rochas Okorocha has advised Mbaise people to change their style of politics which he described as too clannish in practice and...

innonews - December 4, 2020 0
With less than 24 hours to the Okigwe senate election, the rumblings in Imo APC has continued with Governor Hope Uzodinma and...